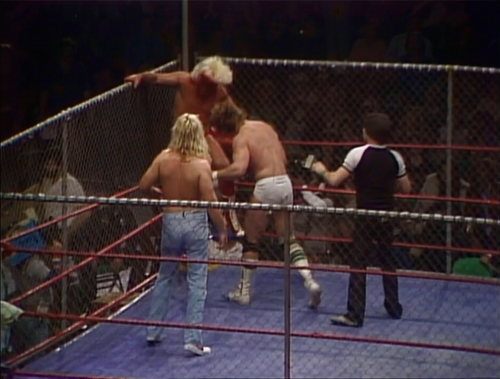 It may have been a festive time of year, but at WCCW’s Star Wars show at Reunion Arena on December 25, 1982, one of the greatest feuds in professional wrestling history was launched.

1981 saw the promotion begin to catch on fire, as David, Kevin and Kerry Von Erichs – the sons of promoter and owner of World Class Fritz Von Erich – took the territory by storm. At the Christmas “Star Wars” event in Reunion Arena, Kerry got a shot at NWA World Heavyweight champion, Ric Flair. After a series of bouts mired in controversy, this match would take place in a steel cage, two-out-of-three-falls. As an added stipulation, Michael Hayes would be a special guest referee – as voted for by the fans – and would keep an eye on the action along with regular official, David Manning. Big Terry Gordy was also standing watch at the door, and held the only key.

Hayes was one-third of The Fabulous Freebirds, along with Terry “Bam Bam” Gordy and Buddy Roberts. They were originally brought in as babyfaces and friends of the Von Erichs, but that would soon all change in a flash.

The title match came down to one fall apiece, when Flair got in Hayes’ face. Hayes responded by decking Flair, and then urged Kerry to cover him. Realising what had happened, Kerry refused to make the pin. Hayes got increasingly angry, and shoved Kerry and Manning before heading for the door to leave. Kerry tried to follow Hayes to reason with him, but was kneed in the back by Flair, sending Michael out of the cage to the floor. Thinking Kerry had attacked his partner, Gordy slammed the cage door into Kerry’s head. Moments later, Manning grudgingly awarded the final and winning fall to Flair when he realised Kerry could not continue.

The Von Erichs/Freebirds feud would rage for several years, and is still talked about today. A territory that was already hot became a raging inferno, primarily due to the fan’s interest in this rivalry. Many of World Class’ top stars, including Chris Adams, Iceman King Parsons, Bruiser Brody, Killer Khan, Jimmy Garvin and General Skandar Akbar’s men would become involved. Adding in the genius of booker Gary Hart, the feud would be at the forefront of the promotion’s boom period of 1981-1986, when World Class was on top of the, well, world.