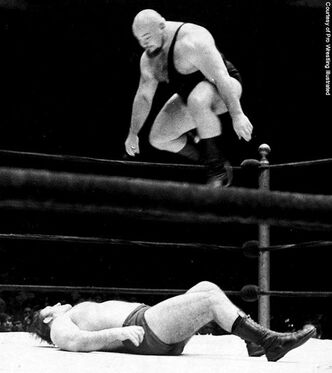 January 18, 2021 marked the fiftieth anniversary of an historic title change in Madison Square Garden back in 1971. “The Russian Bear” Ivan Koloff shocked the wrestling world by pinning Bruno Sammartino for the WWWF Title, ending his incredible reign of seven years, eight months and one day.

The photo – taken by veteran wrestling reporter Bill Apter – captures the final blow, as Koloff jumps off the top rope and lands with a knee into the mid-section. Seconds later, Koloff’s arm was raised by referee Dick Kroll. It is said that no announcements were made, nor was the belt handed to the winner, for fear of a riot. The crowd of nearly twenty-two thousand fans sat shocked and silent. Many fans wept. The New York Daily News covered the result the following day, and showed pictures of distraught fans, crying.