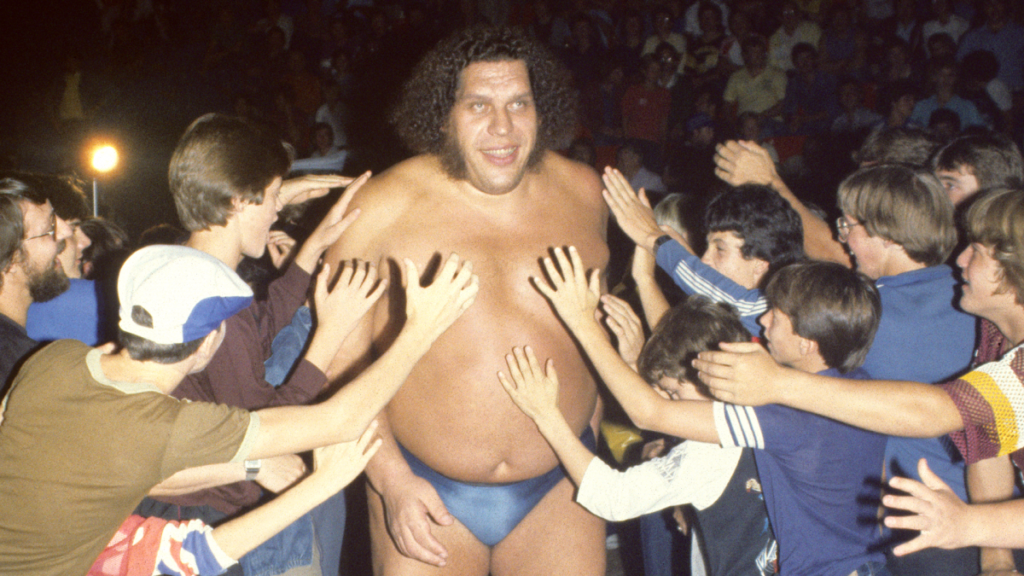 André René Roussimoff was born on May 19, 1946, in the small town of Molien, in north-central France, to a Bulgarian father and Polish mother. By the age of twelve, he stood over six feet tall and weighed over two hundred pounds, and excelled in sports, particularly football (soccer) and rugby.

At the age of eighteen, he left home for Paris, determined never to return until he had made a name for himself. There he was discovered and trained by local wrestling promoter Robert Lageat. André debuted in France under the name Géant Ferré, based on the French folk hero, Grand Ferré. In 1966, he met Canadian promoter and wrestler Frank Valois, who became his business manager.

Due to his size and agility, he was soon booked all around the world. André worked for Joint Promotions in the United Kingdom (1969), and in 1970 made his first trip to Japan (IWE) under the name Monster Roussimoff.

It was during this first tour of Japan that he was diagnosed with acromegaly, the pituitary gland condition that caused his ‘giantism.’ André sadly chose not to get treatment, fearing it would get in the way of his new career.

In 1971, he made his North American debut in Montreal, regularly selling out the Montreal Forum. Around this time, he battled Adnan Al-Kaissie in Iraq in front of a large and hostile crowd. After working for a number of promoters around the United States, Valois organised a meeting for André with the owner of the World Wide Wrestling Federation, Vince McMahon Snr. He debuted for the WWWF on March 24, 1973, where he defeated Frank Valois and Bull Pometti in a handicap match in Philadelphia.

McMahon Snr. became his booking agent, and is credited for giving him the name André the Giant (however, there is evidence to suggest he used the name previously in Chicago). Taking a percentage of his earnings, McMahon allowed André to continue working for other promoters. On June 25, 1976, he faced boxer Chuck Wepner at Shea Stadium, prior to the airing of the Antonio Inoki/Muhammad Ali fight in Japan. André won by count-out when he threw Wepner out of the ring.

That same year, he was cast as Bigfoot in two memorable and high-rating episodes of the Six Million Dollar Man. He started feuding with a heel Hulk Hogan in 1980, when Hogan and his manager “Classie” Freddie Blassie challenged him on television. The following week, the bout was made a no-contest when Hogan badly bloodied André with a foreign object.  The two clashed at Shea Stadium on August 9, 1980, with André getting the victory. They also worked against each other in singles and tag team bouts for New Japan Pro Wrestling throughout 1982-83.

The Giant’s journeyman status came to an end, when he signed an exclusive deal with the now-owner of the World Wrestling Federation (formerly WWWF), Vince McMahon Jnr. (Due to the WWF’s working agreement with New Japan, he was still able to wrestle for Inoki). During this period he feuded with Bobby Heenan and his stable, which included Ken Patera, King Kong Bundy and “Big” John Studd.

After a tag team bout on November 13, 1984, Studd and Patera knocked him out and cut his hair, which they kept in a small plastic bag and brought to the ring. Hogan – now a fan favourite – came to The Giant’s aid and the two teamed regularly. At the first Wrestlemania on March 31, 1985, André defeated Studd in a ‘bodyslam’ match. After winning a battle royal the following year at Wrestlemania II, he took time-off to film his part of ‘Fezzik’ in the Princess Bride. To write him off television, he was ‘suspended’ for missing a tag team match against Bundy and Studd, after much campaigning by Heenan.

As the masked ‘Giant Machine,’ he returned to the ring with New Japan on August 23, 1986, defeating Seiji Sakaguchi. A video promo said to be shot in Japan was sent to the WWF with Giant Machine and Super Machine (Bill Eadie), announcing that they would be arriving soon (late-1986). Heenan protested that the identity of Giant Machine was obvious, but WWF President Jack Tunney said he could not be sure unless the mask could be removed (Gorilla Monsoon even joked that it might be Giant Baba!)

Other well-known superstars donned the hood to further frustrate Heenan, mostly as a one-off, such as Hulk Hogan (Hulk Machine), Rowdy Roddy Piper (Piper Machine), George Steele (Animal Machine), and even The Crusher on a card in St Paul, Minnesota (Crusher Machine).  But a more permanent member was Big Machine (Blackjack Mulligan), who often teamed with Eadie to lessen the load for André.

At the beginning of 1987, one of professional wrestling’s most memorable feuds began when André turned heel with Bobby Heenan as his manager. He strolled onto the set of Piper’s Pit, where Roddy Piper was interviewing WWF champion, Hulk Hogan.

The altercation set up the big main event at Wrestlemania III on March 29, 1987, in the packed Pontiac Silverdome. All previous history between the two was re-written, with the claim that the two had never wrestled each other, and that André had never been slammed much less pinned in his fifteen year career. In front of a reported 93,173 fans, André lost the match.

The Giant earned a measure of revenge when he captained a team against Hogan’s team at the first Survivor Series on Thanksgiving night 1987. Andre was the sole survivor after Hogan had previously been counted out, pinning Bam Bam Bigelow to end the match.

The return singles bout with Hulk took place on the February 5, 1988 edition of The Main Event, and with the help of a crooked referee, he succeeded in pinning Hogan under dubious circumstances. He immediately ‘sold’ the championship to “The Million Dollar Man” Ted Dibiase, before Jack Tunney over-ruled the sale. (Seen by over thirty-three million viewers, it is still the record for the most watched American wrestling match on television).

Andre was entered into the Wrestlemania IV tournament to crown an undisputed champion, but his match with Hogan ended in a double disqualification. Instead, he stood in the corner of Ted Dibiase who made it to the final against eventual winner, Randy Savage. André continued to feud with Hogan until Summerslam (August 29, 1988), when The Giant and Dibiase (The Mega Bucks) lost to Hogan and Savage (The Mega Powers).

​André worked mid-card level feuds with Jim Duggan and Jake Roberts, which he mostly dominated. Duggan knocked André out with his patented wooden board, while Jake exposed his ‘fear’ of snakes. At Wrestlemania V, André lost by disqualification to Roberts in a bout refereed by his old rival, John Studd. He fared less better against The Ultimate Warrior, who defeated André in a series of very short matches.

He teamed with fellow Heenan Family member Haku as The Colossal Connection, and defeated Demolition for the WWF Tag Team Titles. They dropped them back to Demolition at Wrestlemania VI, after which Heenan blamed André for the loss, and he became a fan favourite once again.

On April 13, 1990, André teamed with Giant Baba in defeating Demolition at The Wrestling Summit (a combined WWF/New Japan/All Japan event) in Tokyo. Several managers attempted to gain his services, even Heenan, but André rebuked them every time. When he turned down Jimmy Hart, he was attacked by Hart’s man Earthquake and injured his leg. This enabled him to have time-off for much needed surgery, and he returned in non-wrestling appearances on crutches, usually in the corner of whomever was facing Earthquake.

His final appearance for the WWF was at a house show in Paris on October 9, 1991, where he helped The British Bulldog defeat Earthquake. He finished out his career in All Japan and Universal Wrestling Association in Mexico, in bad condition and mostly in multi-man matches. He was also a special guest at WCW’s Clash of the Champions XX on September 2, 1992.

André the Giant passed away in a hotel room in Paris on January 27, 1993 of congestive heart failure, shortly after attending the funeral of his father. The WWF created the Hall of Fame the same year, with André the first inductee. In more recent years, WWE have also dedicated a battle royal to André, which takes place around the time of Wrestlemania.