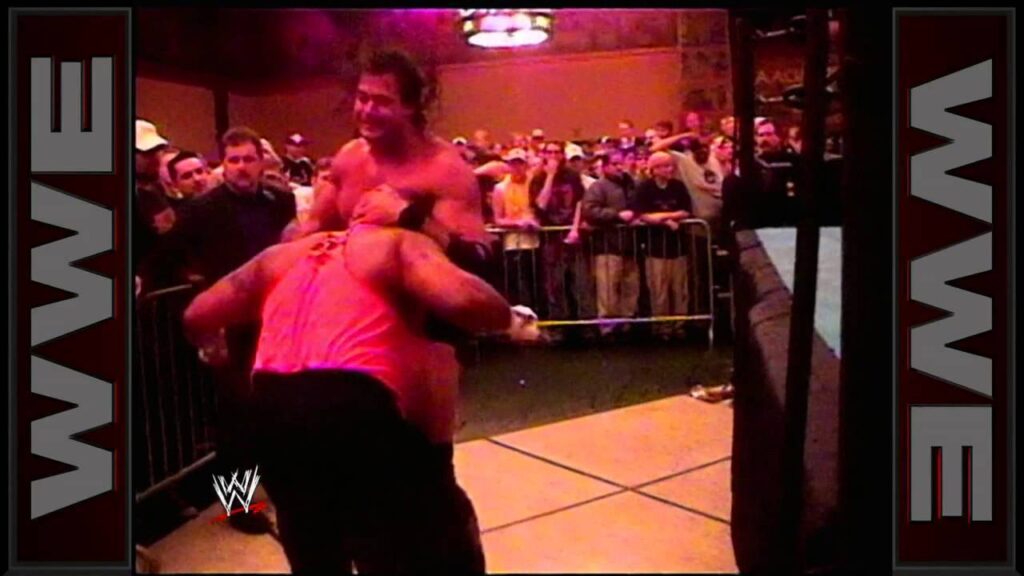 The Monday Night War was an interesting and entertaining time in professional wrestling. The epic war between the WWF and WCW was exciting from week-to-week, largely because you never knew what the hell was going to happen. But it’s important to note how much impact the war had on Extreme Championship Wrestling, a smaller company struggling to stay alive among these two giants of industry. There have been some wild and unpredictable moments that took place in ECW’s time, but perhaps nothing more unusual and mind-bending as when the ECW World Title was defended by a WCW wrestler against a WWF wrestler in mid-2000.

The WWF was well on top of the ratings war at this point, with WCW struggling to gain any momentum. ECW was hanging in there despite many of their top talent leaving for either WWF or WCW. Mike Awesome was a man who stood over six feet and immensely powerful, but glided through the air and had punishing matches, particularly against Masato Tanaka. He came to dominate as the ECW World champion (and for a time, also co-held the Tag Team Titles with Raven).

But it seemed no matter how quickly the company established new stars, they could not satiate the appetites of WWF and WCW, always looking for fresh talent to bolster their already swollen ranks. It also didn’t help that owner Paul Heyman was struggling to keep up financially, and owed many of his wrestlers – not to mention support staff – significant sums of money. Dangerously, that included their own World champion, Mike Awesome.

As a result, Big Mike signed with WCW, as he had an interesting connection few fans would have known at the time; he was related to Hulk Hogan who put in a good word after Awesome spoke to his cousin, Horace (who worked as a member of the Flock before joining the nWo).  The ECW champion made an unexpected debut on the April 10, 2000 edition of Nitro, where he put Kevin Nash through a table. Heyman immediately cried foul, stating he was still under contract, and so the legal machinery went swiftly into motion.

In late-1999, one of ECW’s great success stories Taz departed for the WWF. The timing could not have been worse for ECW; they had just debuted on TNN, their first (and only) national television deal. But Taz left on good terms, and even received Heyman’s blessing before departing. It has been highlighted many times now that despite ECW’s rhetoric of being the anti-establishment group, Heyman did have a positive relationship with Vince McMahon which seemed to be built on mutual respect (this, of course, did not extend to Eric Bischoff at WCW!)

So, in order to turn a negative into a positive, Heyman called Vince for help. It resulted in Taz – now spelt Tazz – to come back and dethrone the ‘disloyal’ champion. The match took place at a house show in Indianapolis and lasted barely a few minutes, with Taz locking on the Tazmission. In reality – as Awesome explained in a later interview – the submission was nullified clearly by his putting his arm in the way so Taz could not choke him for real (this did not occur). He also said he would have preferred to drop the belt to Rhino, whom he believed he could have had a good match. Still, it presented itself as a unique piece of wrestling history, when a WWF wrestler defeated a WCW wrestler for the ECW World Heavyweight Championship.