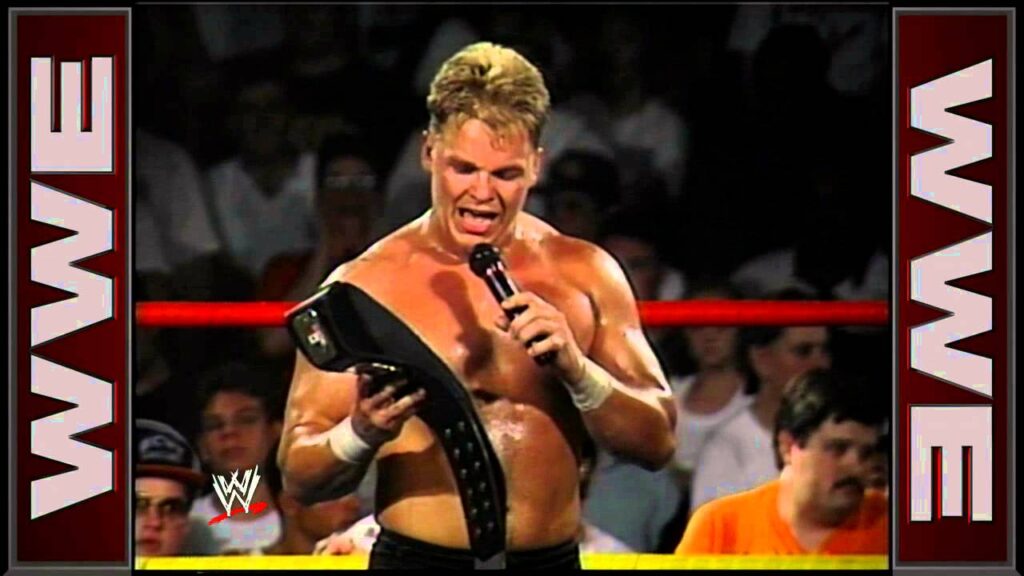 On August 27, 1994, one of the most controversial and talked about moments in professional wrestling took place, when ECW Heavyweight champion Shane Douglas threw down the NWA World Heavyweight Title, moments after winning it in a tournament final.

Philadelphia jewelry store owner and lifelong wrestling fan Tod Gordon started NWA Eastern Championship Wrestling in 1992. Previously, Gordon had been a silent partner in Joel Goodhart’s Tri-State Wrestling Alliance, before it folded due to financial issues. Not far away from ECW’s home-base in Philly was another NWA promoter, Dennis Corralluzzo (WWA) in New Jersey. The two had a brief working arrangement, getting together for an event called Battle of the Belts on January 23, 1993 (which we took a look at on the podcast).

After initially coming to an agreement about territorial boundaries, Coralluzzo claimed that Gordon reneged by running shows on his patch. (Similar problems had apparently occurred between Dennis and Joel, and this seemed to carry over to Tod). Coraluzzo allegedly contacted venues where ECW had shows lined up to cancel them after sending them tapes of ECW’s ‘hardcore’ content, or having the fire marshal shut down an event due to code violations.

According to Gordon, he once caught Dennis and an accomplice (possibly Howard Brody) letting air out of fan’s tires in the parking lot during an ECW show. Cactus Jack (Mick Foley) had Gordon pull over to a phone booth one night and berated Dennis for “taking the food out of his mouth.” Publicly, Dennis complained to various wrestling newsletters.

​Around this time, an ambitious plan was hatched to try and resurrect the NWA to their former glories. ECW were chosen to host a tournament in the ECW Arena to crown a new NWA World Heavyweight champion, since they were the only affiliate with television.  Despite his high standing on the NWA Board, Dennis was out-voted in regards to ECW’s involvement.

Coraluzzo took to the newsletters again, raising the ire of Gordon and Paul Heyman (now a part owner of the promotion), neither of whom wanted to do the show in the first place. Deciding the time had come to extricate themselves from the NWA, the two came up with a plan, and one that would also elevate themselves in the process.

Douglas defeated Too Cold Scorpio in the final, and was made NWA World Heavyweight champion. He began cutting a victory speech, name-dropping past NWA champions, including a man he despised, Ric Flair (going back to when Douglas was in WCW). Then, looking up at the heavens and saying “this is for you dad,” he proceeded to throw down the NWA Title, saying that they could all “kiss his a**!”

With a nervous and concerned Corraluzzo sitting ringside with Gordon, Douglas was handed the ECW belt, where he proclaimed himself “the new ECW Heavyweight champion of the world.” On the next edition of ECW’s television programme, Dennis voiced his “disappointment.” He also said words along the lines that if ECW and Douglas didn’t comply and accept their situation, they would be kicked out of the Alliance.

Right after, a promo from Tod Gordon aired, where he stated that he had dissolved NWA Eastern Championship Wrestling, and in its place, was EXTREME Championship Wrestling. The plan worked. ECW gained a huge amount of momentum, and within a few years, would be presenting pay-per-views, selling action figures and video games, and eventually, gain a timeslot on a national cable outlet.

The NWA never did rise up to challenge the WWF and WCW for national wrestling supremacy, and their plans were quietly filed away.