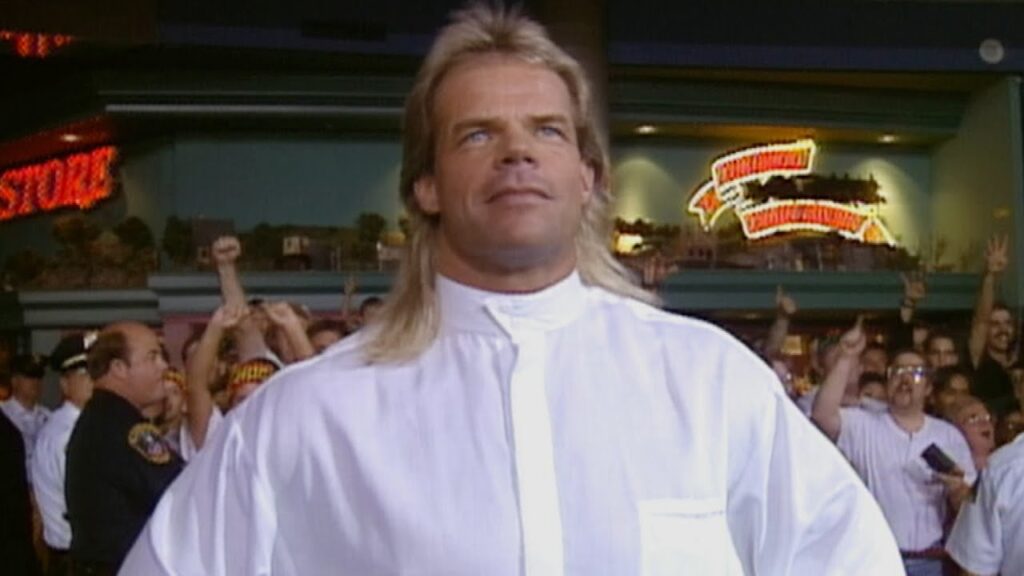 The Mall of America in Minneapolis, Minnesota, was used just once – as far as we can tell – as a wrestling venue. While it still would not equate to comparisons to other buildings like the Tokyo Dome, Dallas Sportatorium or the old ECW Arena, it did host a momentous night in the history of professional wrestling. On September 4, 1995, World Championship Wrestling launched their new flagship programme Nitro, on the TNT Network. Several people in the industry – notably Gerald Brisco – predicted that Nitro would not explode, but fizzle, and be easily surpassed by Monday Night RAW, the WWF’s flagship on USA Network.

However, WCW President Eric Bischoff had other ideas, and fired an immediate cannonade at the WWF when Lex Luger – who many presumed was still with the World Wrestling Federation – randomly appeared in the entrance way before Sting’s match with Ric Flair. He would turn up again later at the end of the show to assist WCW World champion Hulk Hogan, before issuing a challenge for the title. In what would be a recurring theme in the Monday Night Wars, the championship battle would not happen on pay-per-view, but on Nitro.

Monday nights quickly became the primary battleground in the colossal war between two corporate giants. WCW had always played second fiddle to the WWF, since Ted Turner had purchased the assets of Jim Crockett Promotions at the end of 1988 and renamed the promotion. The competitive Turner, who showed evidence of not taking it as seriously as the other entries in his portfolio, apparently had a dramatic change of mind.

In what has been a story told and re-told on a number of occasions, Bischoff was meeting Turner for the first time (June 5, 1995) to discuss international television distribution, specifically with Star TV in China. The main issue was, Star TV was owned by a rival of Turner’s, Rupert Murdoch, but if they could pull it off, the deal would net the company much needed funds, maybe get them in the black for the first time. Bischoff called Scott Sassa (head of operations and programming for TBS) and Dr. Harvey Schiller (head of Turner Sports) to sit-in on the meeting; both agreed.

Bischoff barely got two minutes into the pitch when Ted interrupted him. “Uh, Eric. What do we need to do to be competitive with Vince?” Eric was not prepared for this, and blurted out, “Well Ted, I think we need to have prime time.” WCW’s current flagship was their Saturday night programme, and Bischoff explained that in his estimation, they were not on a level playing field. Shockingly, Turner looked at Sassa and said, “Scott, I want you to give Eric two hours every Monday night on TNT.” ‘You would have thought somebody cut Scott’s tongue out of his head,’ Bischoff recalled in his book, Controversy Creates Cash. Walking out of the meeting, Bischoff looked at Dr. Schiller who simply said, “Well, time to get to work.”

The following morning, Eric spoke with TNT President Brad Siegel, who admitted that “this wasn’t something I would have chosen to do,” but figured if it was going to be on his network, “…it’s got to be great.” The unexpected support of Siegel was a major boost to Bischoff’s confidence. He now went hard to work on a plan to make Nitro different from RAW, a well-established show that began in 1993. (The idea about selling programming to Star TV never came up again).

The major advantage for Bischoff was that he could easily get things green lighted, such as going live (RAW was taped), or starting a few minutes earlier to get the jump on RAW. Eric also had no qualms about giving away RAW’s results and regularly knocked the WWF. But regardless of what one may think about Bischoff’s tactics, Nitro hit the ground running, to the surprise of the many critics (both inside and outside the company). It was also an advantageous time for WCW to take on the WWF; in 1995, business was not good, as Vince McMahon lost several million dollars that year.

Vader was to have been the opponent of Hulk Hogan in the main event for the WCW World Title, but had been indefinitely suspended after a couple of backstage incidents with Paul Orndorff (he would later leave the company for the WWF in the beginning of 1996). Instead, Hogan battled Dungeon of Doom member, Big Bubba Rogers. As mentioned, Luger came to help Hogan fend off the Dungeon of Doom, which also caused Sting and Randy Savage to arrive on the scene. Lex then issued a challenge to Hulk for the belt, which Hogan said he would give Luger on next week’s Nitro.

In the opening bout, Flyin’ Brian scored a win over Jushin ‘Thunder’ Liger, and after the brief interruption from Luger, Sting went on to retain his United States Title by disqualification against Flair, when Arn Anderson interfered.

Despite RAW being pre-empted that week, Nitro still had competition from the opening Monday Night football game, and recorded a very respectable 2.9 rating; the midnight replay netted 1.2. The first head-to-head meeting would take place the following week on September 11, where Nitro scored a 2.5 over RAW’s 2.2, thus dispelling the myth that things didn’t turn around for WCW until the arrival of Hall and Nash.