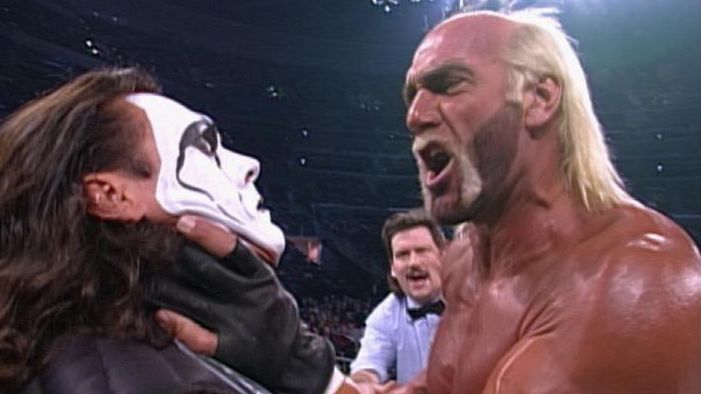 It would be the biggest match in WCW’s history, the bout fans had been waiting many months for, during one of the hottest periods in professional wrestling’s history. A match that, despite the epic war on Monday nights, was not rushed or given away for free, but held in place for WCW’s biggest pay-per-view on the calendar – Starrcade 1997. Of course, I could only be referring to Hulk Hogan versus Sting for the World Heavyweight Title.

And, then, at the penultimate moment, they found a way to stuff it all up.

When Hulk Hogan first arrived in 1994, Sting was one of his closest allies, as “The Hulkster” navigated waters that “The Stinger” had chartered as the top fan favourite for several years. Along with “Macho Man” Randy Savage, they battled the likes of Ric Flair, Vader and the Dungeon of Doom.

But that alliance crumbled when Hogan aligned with the WWF invaders – Scott Hall and Kevin Nash – at Bash at the Beach 1996. Sting and Savage were left broken and battered, and soon, so would everyone else that stood in their way.

The next major challenge for WCW was a WarGames match at Fall Brawl against the now-named New World Order, and naturally, Sting was on board with best friend Lex Luger, along with Ric Flair and Arn Anderson, who reluctantly teamed with their rivals for the greater good.

But in a shocking twist, Luger was attacked in a parking lot by the nWo after confronting a man who looked like Sting stepping out of a limousine. Of all the people in the world, STING HAD STABBED WCW IN THE BACK?!

It was one of the many times the nefarious nWo would outsmart WCW, as Sting was booted off the team, despite his pleas to Luger that it was an imposter. No, they’d prefer to go in a man down than trust “The Stinger,” putting them at an immediate disadvantage over opposition that had done nothing but run roughshod over the company since July.

A man that looked like Sting entered on the nWo side, and then the real Sting arrived, smashed the phony and then left. (WCW would end up losing this battle as well). The following night on Nitro, Sting declared himself a “free agent.”

From this point, we got a darker Sting, with black-and-white facepaint and attire, that paled in comparison to his usually colourful ensemble, and he became silent. No longer was Sting the life of the party. Despite all these changes – and the provocative colours that mimicked those of the hated nWo – he showed himself to be a lone wolf in the fight, as he had proclaimed in his “free agent” promo the night after WarGames.

After his cameo at Fall Brawl, Sting took an in-ring sabbatical. Disclaimer: After the “free agent” promo on Nitro, Sting did a tour with New Japan which was not acknowledged by WCW, before he arrived with the new look. I mention this only because I know Mr Chris Man would give me heck for leaving that bit out.

Nevertheless, for the benefit of the story, Sting never wrestled again until Starrcade, which did not take place until December 28, 1997. Which was amazing in itself, as this was the height of the “Monday Night War,” when matches usually preserved for pay-per-view were given away for free in an attempt to keep fans away from their remote controls.

Instead of having Sting wrestle, he routinely hid in the rafters of arenas like Batman, just waiting for the nWo to step out of the shadows, before rappelling down in dramatic fashion and destroying the entire group – which by this point had grown to epic proportions – with his now trademark black baseball bat. This did a fantastic job of building Sting up as the ultimate hero – a superhero no less – without having to take a single bump!

The task then, was to get Sting back in the ring. He was simply the only man who could save WCW. They milked this for weeks, as WCW Commissioner JJ Dillon – perhaps Jim Gordon to Sting’s Batman – attempted to get Sting to sign a contract to wrestle again. You can take on Syxx! No, what about Curt Hennig? Each time, Sting simply tore up the contract and walked away.

Finally, JJ got the idea, as the fans chanted for the obvious match that needed to take place, and the signs that were appearing in arenas. Thus, when JJ got a contract for him to fight Hogan, Sting accepted.

Everything was in place. They had built Sting as more than a realistic shot at beating the top bad guy and getting back the title. Sure, it would be predictable, but sometimes in wrestling, the predictable route is what works best. The last thing anybody wanted in this situation is a convoluted, zig-zagging, confusing mess of a finish just for the sake of it.

Unfortunately, that’s exactly what WCW did.

Of any match that this writer has seen, this is the greatest example of a time when all the booker had to do, was go with the predictable route – allow the hero to slay the dragon, roll credits, and watch the money pour in at the box office. But Eric Bischoff had given Hogan something when he signed him back in 1994 that was to bite him on the arse (even if he still doesn’t know it yet).

In order to entice The Hulkster to take a break from being an action star, Bischoff threw in the caveat of complete creative control. As Hogan would later say, this was the one thing Vince McMahon couldn’t promise him. So, Hogan threw in his lot, and for a while, when everything was done to placate Hogan and make him feel safe, the whole total creative control thing didn’t rear its ugly head too much; it didn’t have to.

But when it did rear, it created a crack that was never repaired, and caused WCW to collapse into a sh*theap.

The moment arrived for the big World title encounter, and one can discuss everything from Sting walking out like everyone else as his entrance – despite the well established coming down from the rafters – and of Hogan dominating a fair portion of the match; all of that comes down to an individual’s observations. But then we get to the finish.

Nick Patrick was assigned the referee for the match after a ‘random’ draw, despite him having been with the nWo just a few months prior. Hogan hit the patented leg drop, and no doubt everyone expected Sting to power out before the three.

After a regulation three count, that any referee would have done, Sting was pinned, clean, in the middle of the ring. You could hear a pin drop as the fans were at a loss; the movie was coming to a close, and yet the dragon slayed the dragon slayer. But that wasn’t the end of the film.

Bret Hart was a recent signing for WCW, and had been the special referee earlier in the night for a match between Bischoff and Larry Zybyszko. Playing on what had happened recently in Montreal, Bret proclaimed that Patrick had made a ‘fast count’ – screwing over Sting in other words – and restarted the match under his control. Moments later, Sting got the Scorpion Deathlock on Hogan and got the submission win.

It was the equivalent of turning off and going on a route designed by a mad GPS though back alleys and side-streets before turning back onto the road that you were already on, in order to get to the destination. Sting was the new World Champion, and was embraced and surrounded by the entire locker room, but it left an empty feeling when all the hysterics died down.

What on Earth happened? Why did this all come about?

According to Hogan, he was concerned about Sting being the champion moving forward, as he felt like Sting was not in proper physical shape, certainly not the kind of shape he needed to be to realistically defeat Hulk Hogan. Supposedly, Sting was not hitting the gym as much since he wasn’t wrestling week-in, week-out. Sting’s lack of a tan also came into question. Bischoff agreed, although realistically, it wouldn’t have mattered if he agreed or not, because as already explained, Hogan was quite within his right to not only question, but overturn any booking decision involving himself that he didn’t agree with.

Not surprisingly, the following night on Nitro, the title was vacated due to the fuzzy finish. It was tough to argue, even with the heel Hulk Hogan – he had legitimately beaten Sting in the center of the ring, without the usual interference from the rest of the nWo – only to have the match overturned! So over a year of build went down the toilet over a fast count that wasn’t.

And that really is the Nick Patrick in the room; did he just forget? Years after the demise of WCW in 2001, Patrick did an interview with former WCW ring announcer, David Penzer, and he was asked along the lines of that same question – what happened? According to Patrick, he was told two different finishes by the two participants – one asked him to do a fast count, the other said do a normal count and Bischoff abstained from making a call.

It could be ascertained then, based on that statement, that Sting was the one who asked for the fast count. Therefore, it would appear that Patrick had again aligned with the nWo, which would have made sense. Conversely, Hogan would have wanted the regular count so he could appear strong, but made no sense.

Bret Hart coming down to confront Patrick confirmed that the fast count was the ‘canon’ finish. Why else involve Bret and make him look silly? But because of what we presume to be Patrick having to go with Hogan’s regulation count, it took the absurdity to a whole other level. Effectively, Hogan ignored the script and went into business for himself.

While WCW continued to do good business after Starrcade, simply due to the momentum the company had at the time, it is arguable that this was the big moment when the wheels began to come off. Fast forward to the middle of next year (1998), WCW was a shambles, not helped by the WWF finding the formula to compete. Indeed, despite Shawn Michaels’ apparent reluctance to drop titles cleanly, he still did so at Wrestlemania XIV to kickstart the Austin Era.

Much like Starrcade – which goes down as the most profitable WCW pay-per-view of all time with a 1.9 buyrate – Wrestlemania XIV was a major success with a large gathering of mainstream press due to the presence of Mike Tyson, and with all those eyes watching, business was done, the exact opposite of what occurred at Starrcade 1997.

Bischoff continues to defend the decision to this day, so what do we know?