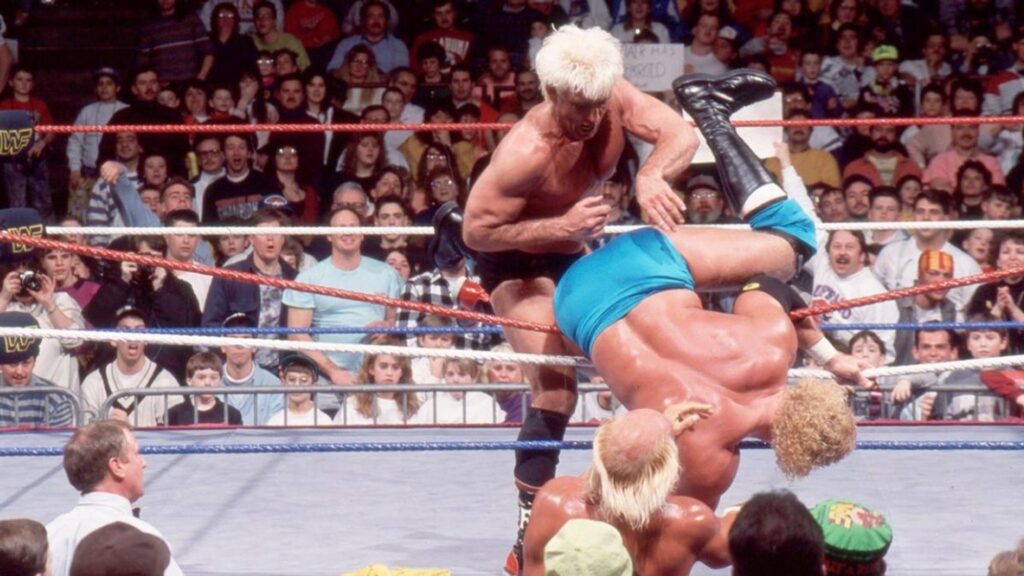 As Hulk Hogan was to the WWF, Ric Flair was to Jim Crockett Promotions, later World Championship Wrestling under Ted Turner. The penultimate NWA or WCW World Heavyweight champion, “The Nature Boy” was the glue that held the promotion together. But that wasn’t the opinion of a certain Jim Herd, who took over as Executive Vice President in January, 1989.

In his infinite wisdom, Herd thought Flair’s main event days were over, and one thing led to another, which prompted Flair to do the unthinkable – jump to the World Wrestling Federation at the end of 1991. Flair was still in possession of the World Heavyweight Title, and as part of the hype for his arrival, Bobby Heenan showed off the ‘big gold belt’ on television and proclaimed Flair – not current WWF champion Hulk Hogan – the “real World’s Heavyweight champion.”

In a time before the internet however, most WWF fans would have been largely ignorant of Ric Flair and his prior legacy. A bold statement had to be made to prove that Flair was “the man.”

All signs led to the Royal Rumble on January 19, 1992, when WWF President Jack Tunney decried that the winner of the Rumble would be the “undisputed WWF champion.” This was the result of Flair’s shenanigans, who interfered in two title matches involving Hogan and The Undertaker, the first at the Survivor Series, and then at the Tuesday in Texas pay-per-view.

Many fans – including this writer – proclaim the 1992 version of the Royal Rumble as the best Rumble of all time, and its arguably a tough statement to refute. The sheer volume of talent in the match was staggering, and the fact that Flair entered at number three was also a remarkable feat. Clearly, the company felt that a herculean effort was required to show the WWF fans that Ric Flair was the real deal, and he surely overturned a few critics opinions that night. Add in the superb commentary provided by Bobby Heenan – who was exasperated right till the end after placing a large bet on Flair to win – and Gorilla who went from giving Flair no chance to becoming a believer, and you have one memorable way to crown a new champion.

The man who routinely went sixty minutes defending his NWA or WCW World Heavyweight Title gave the WWF a rare treat by going just over an hour to become the ‘undisputed’ WWF champion.

(As a side note, this event also marked the occasion when Rowdy Roddy Piper – whom Flair first challenged upon his arrival – won his first and only championship in the WWF, when he defeated The Mountie for the Intercontinental Title).

Flair would become a two-time holder of the WWF championship before leaving the company shortly after the 1993 Royal Rumble. He lost to former Executive Consultant Mr. Perfect in a loser leaves town match on RAW, and returned a now Herd-less WCW to reclaim the World Heavyweight Title, where he was welcomed home like a hero returning from a great crusade.