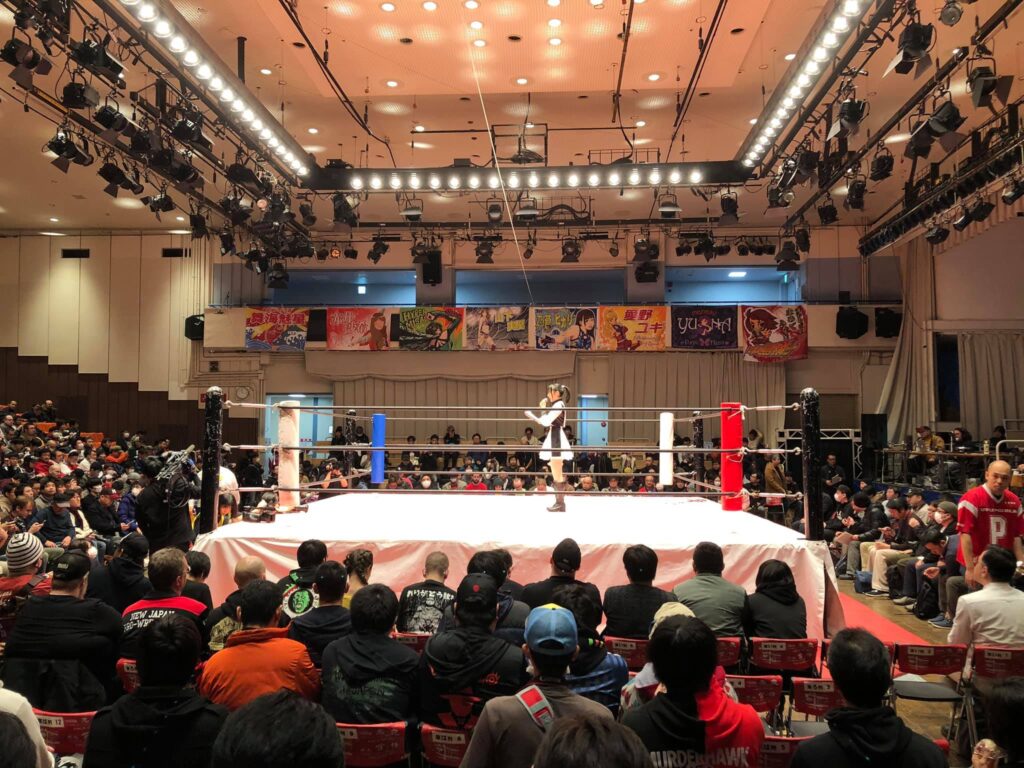 “間も無く水道橋駅 到着します”, the announcement comes over the speakers. You think you understood, but you’re uncertain. You heard some other stuff but that stood out. “The next station is Suidobashi”, the voice repeats in a more familiar language.

You prepare yourself and eye a waypoint to the door through the packed train. You’re concerned about being able to make it to the door in time through the wall of people that stand in your way. You’ve heard about trains in this city being likened to sardine tins and you’re not in a position to argue with the analogy at the moment. You haven’t prepared for the possibility of not being able to get off. You’re starting to feel a little anxious. The train slows, stops and as soon as the doors open – your fears allay. Rather than the image of a salmon swimming upstream that you’ve been preparing for, you’re a minnow submitting to the flow of the tide. Surely they can’t all be going to the same place?

You open the Maps app on your phone to confirm the route you have in mind. You’re not the only one with this route in mind. After crossing the street you take the foot bridge over the Kanda River and see a ferris wheel in the distance. A little further and a sign says “Tokyo Dome City”. This reassures you that you’re heading in the right direction. You’ve heard there was a Denny’s here and notice some of the crowd heads down the stairs opposite it. You walk past the Lawson convenience store and begin to see a Dome shape appear in the distance. It looks a little egg like… You head downstairs into an open area and see the green text explain the egg. “TOKYO DOME”. The crowd continues toward it. You see people forming groups off to the side, greeting some of your fellow commuters. Now that the crowd has spread you can see that they are wearing shirts with similar unfamiliar logos. Some are carrying little fans. You surmise that there must be a concert taking place in the egg dome.

Your phone tells you that you’re in the right place, but you doubt it. You look up and see an unassuming brown building. A gap opens in the crowd and see a poster in the window. A few shirtless men with one holding a gold belt over his shoulder. This must be it. You look a bit closer and notice a line forming entering the lobby of the building. You see someone that looks like you in the line and ask “Hey man, do you know where Korakuen Hall is?”. “You’re in the right place, this is the line for tonight’s show”, you hear in an English you can understand but an accent you can’t pinpoint. “Thank you!”, you reply, relieved, and head to the back of the line.

As the line moves along you eventually make it into the building and it doesn’t look like the type of place that would hold a wrestling show. You notice that there are a set of elevators, but the line heads through a door and as you get closer to it, up a set of stairs. As your eyes adjust to the black painted stairwell you notice the walls are covered in graffiti. It’s the first time you’ve seen it in this country. A lot of it is Japanese characters and dates. Some of it drawings and some of it is actually in English. Once you see the English, you realise that these are names and must be matches. People have been writing the matches that they’re here to see while waiting in line.

After emerging from the stairwell, the line snakes around on the same floor. You fumble your way through an exchange that ended positively when you presented your ticket, in a scene not too far different from every time you’ve been to a shop since you got here. You’re now in a foyer area with no idea where to go. A kiosk with pictures of fried chicken and beer looks like a great spot, but not right now. You see someone in a shirt that says “Korakuen Hall” and figure they work here. (Either that or they’re a big fan of the place). They see you and notice you’re struggling. “May I please see your ticket?”. You’re relieved at the English. You show your ticket. “I will show you to your seat, follow me”. You’ve found your saviour. You follow the staff member and as you walk through an opening, it hits you. You see the bleachers, the orange seats, the balcony, the ring. You made it to the promised land!

The above experience is not an unfamiliar experience to many wrestling fans who’ve made a trip to Tokyo over the last 60 years. Some of the finer points may vary, like the other buildings around. There may have been baseball at the Dome (if it was built by then) instead of a concert. Or if you take the Metro instead of the JR line you might have gotten off at Korakuen station and approached from the other side. You may have even come through the Koishikawa Korakuen Gardens or LaQua. But that feeling of curious adventure, doubt and final relief is pretty universal for the first time.

Korakuen Hall has been called “the Madison Square Garden of Japan”, which elevates it to a certain level of prestige. But it’s so much more than that. While other venues are more famous (Sumo Hall, Budokan…) or have held bigger matches (Tokyo Dome, Osaka-jo…) – Korakuen Hall is the heart of puroresu.

Built in 1962 to prepare for the upcoming Olympic Games, the Hall is on level 5 of a building that’s key feature is that it is brown. It opened on April 16 and was a boxing venue, hosting the event at the 1964 Tokyo Olympics.

On November 25, 1966 it entered the lore of professional wrestling when the post-Rikidozan Japan Wrestling Association held the second event of their Winter Series tour – an eight match card headlined by Giant Baba gaining a victory over Luis Hernandez. In a little piece of trivia (and helping with the MSG comparison), Gorilla Monsoon appeared in the undercard with a win over Kumagoro Okuma. Kantaro Hoshino defeated Akihisa Takachiho in the opener, making him the first wrestler to win a match in the venue.

Over the years the role of the venue for each promotion has changed in relation to the size of the promotion at the time. For New Japan Pro Wrestling, and through the Baba era of All Japan Pro Wrestling – it has been the home of mid-level shows as tours pass through Tokyo. For many independent promotions, it has been the location of their big events – often recorded for TV broadcast. A recent example of a promotion transitioning between these two is World Wonder Ring Stardom. Prior to the COVID-19 pandemic, the latter was true. After purchase and significant investment by Bushiroad, the significance of a Korakuen show has dropped as they’ve been able to hold successful shows in larger venues. And today’s All Japan Pro Wrestling is an example of a promotion going the other way. Between all the wrestling, mixed martial arts and boxing, it’s not uncommon though for events to be held near-daily, sometimes twice a day.

Many significant moments have happened inside the Hall. Numerous championships have changed hands over the years – one of the most significant being Manabu Nakanishi’s capture of the IWGP Heavyweight title from Hiroshi Tanahashi in 2009, as New Japan did not generally promote Heavyweight title matches in Korakuen. In 1985 New Japan invader Riki Choshu made his All Japan debut. 2003 saw Big Japan Pro Wrestling transform the stage and ringside area into a house for the “Great Kojika’s House Death Match” event. 2015 saw an ugly incident in Stardom when Yoshiko brutalised Act Yasukawa. At the start of the pandemic, 2020 saw Pro Wrestling Noah hold a unique match in an empty building between GHC Champion Go Shiozaki and challenger Kazuyuki Fujita which opened with a staredown lasting 30 minutes.

Many debuts, retirements and tribute shows have taken place at Korakuen as well. Far too many to list but in the span of about a week during my own tour in 2019/20 I saw Stardom’s Hazuki and Ice Ribbon’s Tequila Saya retire as well as TJPW’s Sena Shiori debut.

For all the history and status, Korakuen Hall isn’t a large venue. The ticketed capacity has varied over the years from about 2,300 at peak, to around 1,700 once fire codes began to be enforced. During the pandemic it capped at 714. The capacity can vary depending on the seating arrangement. Regardless of the number – a packed Korakuen Hall is like nothing else. The Korakuen crowds are loud and passionate about their wrestling and regardless of the status of the event in the context of the promotion’s calendar, a lot of wrestlers seem to give it just that little bit extra. It’s often said there’s no bad seat in the building.

In addition to the Hall, there is some significance around the venue. The Tokyo Dome is right next door, sight of many historic matches. Tokyo Dome City Hall over by the hotel has also held wrestling since it was built in 2008 and is bigger than Korakuen Hall. It’s taken some of the bigger events away which has helped make Korakuen more accessible to smaller promotions. Tokyo Joshi Pro Wrestling held their first Wrestle Princess event in a sign of their growth at the end of 2020. The Tokyo Dome City complex is built on the site of the former Korakuen Stadium – home of many classic Rikidozan matches.

The venue’s 60th anniversary will be celebrated with a pair of shows in April. New Japan and All Japan will be working together (celebrating their own 50th anniversaries) on April 15, and the next night will see a ‘Women’s Wrestling Dream Festival’ event.

Except where credited to third parties, all photos are the authors own work. If you’d like to use them elsewhere, while not required, a link back to the website would be greatly appreciated.