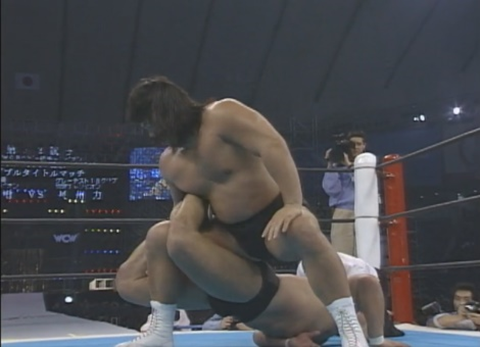 The feud that netted New Japan two of its biggest stars (not named Inoki) in the 1980s, Riki Choshu and Tatsumi Fujinami put on a number of classics over the years. Fitting that as we start our journey in the early 90s, we acknowledge two of the men that helped get the company to this point.

This match is a unification match where the winner walks away with Fujinami’s IWGP Heavyweight title, and Choshu’s Greatest 18 title (while a different lineage, the same physical belt that represented the WWF World Martial Arts Heavyweight Championship).

The two begin the match fairly evenly, being very familiar with each other from their battles over the years with the bigger Choshu looking to use his size and strength advantage over the former junior heavyweight Fujinami’s speed and technical advantage. After the evenly matched opening, Choshu manages to take the advantage with a backdrop counter to Fujinami’s headlock. The pioneer of the hold manages to lock Fujinami in the Scorpion Death lock (or Sharpshooter for the Bret Hart fans).

After releasing the hold Choshu takes the offence to Fujinami before being counter into the Dragon’s trademark Dragon Screw and Fujinami returns fire with a Scorpion Deathlock of his own. Fujinami is on offence with a series of kicks, followed up by a dropkick. Choshu attempts another backdrop but Fujinami twists in mid-air to counter it and follows this up with Makabe’s knee. He drops Choshu on his head with a piledriver and then tries to finish the bout with his Dragon Sleeper. Choshu finds the ropes.

Fujinami tries the hold again, but Choshu finds his way back to the ropes. Fujinami tries the more conventional sleeper but this time Choshu’s boot finds his head. It’s not enough to derail The Dragon’s momentum though as he goes to the Inoki playbook for an Octopus stretch. Choshu manages to power out. After a scoop slam, Fujinami ascends to the top rope only to be met by a superplex from Choshu. Choshu tries to mount some offence but is cut off by a dropkick. Fujinami goes back to the side headlock and opens himself up to two backdrops from Choshu. Three lariats later and Riki Choshu wins the IWGP Heavyweight title for the third time, and the main event of the first January 4 Tokyo Dome event in 12 minutes, 11 seconds.