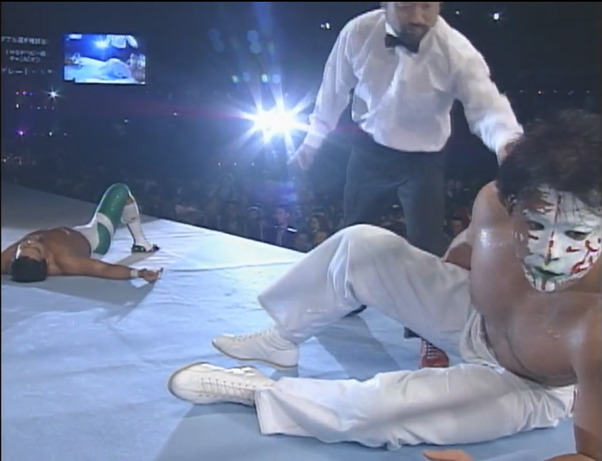 From looking to the past, to looking to the future (as of the time of the match anyway, it’s all looking to the past for us). Keiji Mutoh and Masahiro Chono (alongside Shinya Hashimoto) were known as the Toukon Sanjushi, or The Three Musketeers. In 1984 the three graduated from the NJPW Dojo and adopted the name while on excursion in Puerto Rico together. Mutoh and Chono clashed in the first ever G1 Climax tournament final in 1991, which Chono won. (The tournament was known under many different names prior and contested annually from 1974 to 1989).

Here is Mutoh under his facepainted ‘Great Muta’ persona (which he is more familiar in the west) defending the IWGP Heavyweight title against the defending NWA World Heavyweight champion Chono.

The match starts with the two feeling each other out and after Chono gets the better of one exchange Muta rethinks his game plan on the outside. Muta comes back in and takes the advantage with speed, agility and a well-placed spin kick. Muta takes control on the mat with a side headlock, but Chono powers back to a standing position and regains control with a Samoan drop and a Yakuza kick, sending Muta back outside. January’s quite cold in Japan which explains the ice pick that Muta finds under the ring. Surrendering it at the request of the referee he jumps back in and takes control of Chono, using his signature Flashing Elbow and then takes things back to the mat. Chono manages to bring it back up again using his power. Power is the game plan as Chono wins a test of strength and takes Muta to ground and applies a variation of Muta’s own Muta Lock (inverted Indian Deathlock). Muta finds the ropes. Back up and Muta wins the next test of strength thanks to his quick kicks. A quick trip to the outside sees Muta throw Chono into the guard rail and then back in, where Muta chooses the aerial option and meets him with a flying chop. They’re then out to the elevated ramp where Muta hits a running bulldog. Muta gets some distance and then fires in with a long run-up to deliver an effective lariat.

Muta’s back in and the ref starts the count on Chono. Chono is obstructed by Muta in making his way back in so clocks him with a forearm from the outside and attempts to get in via the top rope. He is again obstructed by Muta who catches him with a superplex, and follows it up with a backdrop. Kick out at 2. Muta tries the pin again, this time with a bridging German Suplex. Again, kick out at 2. Chono retreats to the corner and Muta charges at him with a Handspring Back Elbow. The follow up Moonsault is avoided and Chono capitalises with his STF. Mutoh to the ropes to break the hold. Chono comes in with a Yakuza kick and Muta returns fire with a dropkick. Chono tries the same, and is met with the same result. Another three times. This looks to be taking more out of Muta than Chono however. The fourth and fifth Yakuza Kicks are met without reply and Muta heads outside to the ramp. Chono tries to suplex him back into the ring, but Muta counters with a Brainbuster to the ramp. Muta props Chono up against the rope and tries his Handspring Back Elbow, but Chono moves and Muta crashes into the ropes. Chono picks Muta up and gives him a backdrop to the ramp. Chono crawls back to the ring leaving the referee to count Muta. Reminiscent of earlier, Muta dives over the ropes and hits Chono with a flying forearm. Brainbuster countered into a cradle from Chono for two, who then heads up top and connects with a shoulder block. 2. Chono drops Muta with a powerbomb, who kicks out. Shot off the ropes and a Samoan Drop from Chono who then goes back to the STF.

Muta struggles, but finds the ropes. Muta looking more like Mutoh now the facepaint has worn off. Back to their feet and Chono tries to send Muta to the ropes but is countered and Chono caught with a frankensteiner for two. Muta up for the moonsault but Chono puts the knees up. Chono’s turn to fly and Muta steps aside avoiding the shoulder block. Scoop backbreaker, Muta up for the moonsault, hits it this time and Chono’s out at 2. Muta tries again, this time successful for the 3 and retains the IWGP Heavyweight title, as well as adds the NWA World Heavyweight title to his collection in 19:48.