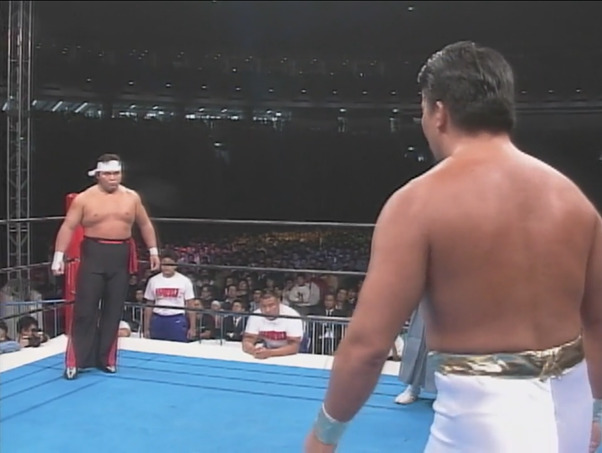 Yesterday we looked at Mutoh and Chono, today we throw the third musketeer into the mix. Shinya Hashimoto. The Three Musketeers each used a different style of wrestling. For Mutoh it was speed, Chono used a more power-based game and Hashimoto the strike-based strong style.

Between the Muta/Chono match yesterday and this match today, Hashimoto defeated Muta to win the IWGP Heavyweight title. Until just recently Shinya Hashimoto was the longest-reigning IWGP Heavyweight Champion of all time with his third reign. Let’s take a look back at one of the matches from his first.

Prior to the match the two are locked focus. They circle each other, not breaking eye contact. Both miss with a kick, fired as a warning shot to the other party. They lock up in a test of strength and are very evenly matched until Hashimoto delivers a boot to Chono. Chono holds on and backs Hash into the corner. Clean break. Back to the ready position and Hash connects with a low kick. Chono fires back with of his own to the inside. A collar and elbow and Hash aggressively backs Chono into the corner. Referee Tiger Hattori has to work hard for the break here. Another attempt at a test of strength is quickly thwarted by a slap from Hashimoto. They go back to it and Chono gets the advantage with some shoulders and a not very effective Yakuza kick. Hash returns with a kick of his own. Very even matchup here.

Back to the lock up and Hash tries an armbar hold but Chono finds the ropes. After the break a rush from Hash sends Chono into the far corner and the break this time, is not clean. They’re back to the middle with a face off and Chono quickly turns a collar and elbow into a side headlock. Hash shoots him off the ropes and the two meet with a shoulder block. Hash off the ropes and takes Chono down with a shoulder block. Hash with a standing leglock and then delivers an elbow to the knee, transitioning the hold to ground. Chono tries to fight out but Hash moves to a more advantageous position and improves his hold. He breaks it with a stomp to the knee and Chono delivers an Inoki-Ali style low kick before Hash gets some of his own in. He takes Chono to the ropes and continues to work over the knee. They’re back to a lockup with Hash having the advantage. Chono takes him down with a drop toe hold and uses a leglock of his own. After breaking a few stomps to the head of the rising Chono and a headbutt serve only to fire up the champ and he gets a few good shots in. This isn’t enough as Chono returns with some more of his own. Hash hits an enzuigiri and the takes Chono down with a Yakuza kick.

Follows it up with an elbow drop and then a half crab. He breaks, slams the leg and then Chono rises to meet a series of strikes. Chono interrupts it with a yakuza kick but is met with a spinning back kick that takes him to ground. He gets back up only to cop three kicks to the chest, the last of which takes him down. Hash locks in a crossface chicken wing, converting it to a rear chinlock before Chono finds the ropes. Hash breaks with a kick on the way out. Back up and Chono tries to mount some offence with knees to the gut. He’s met with a lariat for his trouble which Hash follows up with a Kimura attempt but he struggles to bend the arm. Chono begins to rise and Hash converts over to an armbar. Chono rolls his way out of trouble while Hash hangs on. Hash delivers a backdrop and then a belly-to-belly suplex for 2. Hash goes for a trademark DDT but Chono has him scouted. He doesn’t scout the German suplex however which leads to a 2 count. Hashimoto in control here. Hash drops Chono with a suplex slam and it’s good for 2. He goes back to the kimura with a bit more luck this time and transitions Chono’s fight back into a cross armbar attempt. Chono escapes it by grabbing a leglock, but it’s futile as Hash finds the ropes, and Chono finds himself with a few kicks to the chest.

Hash going for a Brainbuster to finish it, but Chono explodes out of and hits a desperation backdrop. Chono climbs to the top rope which isn’t a wise idea given that Hashimoto meets him up there and tries to superplex him back down to earth. Chono fights off and maybe it was a good idea because he hits a flying shoulder block. Chono tries to rally the fans and knocks Hash back down with the second of two yakuza kicks. Two is the magic number as Hash kicks out. Chono shoots him off the ropes and musters the strength for a Samoan Drop that scores two. Chono goes back to the leg with a half crab that he converts into an STF. This could be it for a now-bleeding Hashimoto as he’s not showing much struggle. He edges towards the ropes and Chono decides a Sleeper Hold may be more effective. It’s not. Hash breaks free and the two separate. Hash definitely looking like that exchange took a lot of him. Chono in control with a yakuza kick and a running forearm. Hash stays steady and meets an incoming Chono with a judo arm drag that reminds Chono who’s the champ. A DDT attempt is countered with what looked like a low blow (inner thigh) and Chono goes for a rolling leg lock. Looks as if Chono didn’t lock it properly as he breaks it in favour of the STF.

Hash breaks free, but looks just about done. Chono wondering what it will take as he catches a breath. He goes back to the well with a yakuza kick to the rising Hashimoto. A second attempt is met with a dropkick. Both men to feet and Hash sweeps the leg before locking in a leg bar. Hash takes Chono up with a Finlay Roll for 2. Looks pretty impressive from someone the size of Hashimoto. Hash picks Chono back up looking for a brainbuster but is countered with a small package for 2. Not to be discouraged he tries again but Chono backs into the ropes. Hash says “if you want to play on the ropes, we can” and takes him up, only to bring him down with a superplex. 2. Chono hits a flurry of offence, but doesn’t get much in before an enzuigiri from the champ. Hash follows it up with a rolling wheel kick that doesn’t quite connect and a front facelock. Perfect position to deliver some knees. Also the perfect position to finally hit that Brainbuster. This match has taken a lot out of him though as he is slow to cover, and the time helps Chono to kick out. Hash tries another cover for the same result. He fires up, steadies Chono and comes off the ropes to spike him with a DDT for the victory. Your winner in 28 minutes, Shinya Hashimoto.

I feel Shinya Hashimoto – while legendary in Japan and a record-setting champion – is someone that is underrated by western fans newer to puroresu (myself well and truly included here). While this is the only match of his that will be covered in this series, his match with Nobuhiko Takada from Battle Formation in the Tokyo Dome in April 1996 is well-worth a watch (http://njpwworld.com/p/s_series_00143_1_1)

Unfortunately Hashimoto died in 2005 from a brain haemorrhage but his wrestling legacy lives on through his son Daichi.