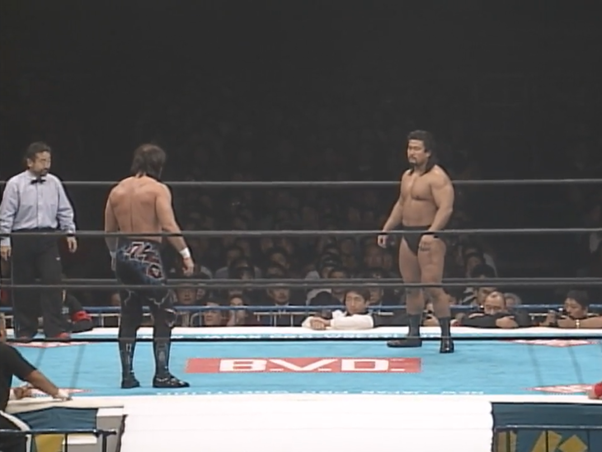 Final Power Hall was the last stop on the Riki Choshu retirement tour and the departing star wrestled a series of matches dubbed the Riki Road Final Message 5. These were a short series of match against Kazuyuki Fujita, Yutaka Yoshie, Tatsuhito Takaiwa, Takashi Iizuka and Jushin Thunder Liger. Choshu was victorious in all of these, except for the one with Iizuka (who would later change his name to Takayuki Iizuka, shave his head and become a deranged mad man allied with Chaos, and later Suzuki-gun).

Today we’re looking at the final match of this event featuring the 20th IWGP Heavyweight Champion Kensuke Sasaki defending against Keiji Mutoh. Sasaki got his start wrestling for Riki Choshu’s Japan Pro-Wrestling in February of 1986. Following Nobuhiko Takada’s defeat of Mutoh for the title, he lost it to Shinya Hashimoto in April 1996 (for the third time, it’s a great match that you should go and check out). Hashimoto’s record-setting reign would be ended by the G1 Climax winner Sasaki in August 1997.

Keiji Mutoh, who we are getting quite familiar with in this series takes on a different look here in early 1998. The NJPW/UWFi invasion led to World Championship Wrestling creating the New World Order, which lead to NJPW creating NWO Japan. NWO Japan was led by Masahiro Chono and throughout 1997 Mutoh fought with the group. Muta was a part of the group. In September, Mutoh turned on Kazuo Yamazaki and Kensuke Sasaki to join Chono and NWO Japan

The bell rings and the two stare each other down, each well aware of how they got to this stage. A collar-and-elbow tie up to begin. The more powerful Sasaki has the edge in this and backs Mutoh to the ropes. Clean break. Another collar-and-elbow attempt but Mutoh uses his speed to get around for a waistlock. He works around to the arm and gets a wristlock that takes Sasaki to his knees. A headlock takedown from Mutoh which he holds. Sasaki rolls him back for a one count but Mutoh keeps the headlock. They’re up and Sasaki comes out with a top wristlock that takes Mutoh down. Sasaki to the headlock and traps the arm. Picks Mutoh up and hits him with a clubbing blow and two chops. Sends him to the ropes, Mutoh ducks the clothesline and gets a dropkick, dragon screw and attempts a figure four. Sasaki kicks him off, takes him down with a snap suplex and goes for an armbar. The two separate and stare each other down.

A bit of a breather and they lock up with a test of strength. Sasaki is the stronger of the two and drives Mutoh to the mat for a 1 count. Mounts him for another 1. They get up and Mutoh gets an arm drag in. He gets a short arm scissors on the grounded champion. After having that in for a bit, tries to transition to a cross armbar but Sasaki holds him off. Sasaki powers up and drops Mutoh with a high angle German suplex. He goes for a cross armbar of his own but Mutoh finds ropes. Sasaki gets a boot in and lays Mutoh out with a DDT. He gets a kimura lock on and then transitions to a cross armbar, via a quick headscissors. Mutoh’s in trouble and rolls up, escapes and then hits a flashing elbow. With the damaged arm. Mutoh attempts what looks like a homage to the retiring Choshu, but struggles to turn Sasaki over for the Scorpion Deathlock. He instead takes it to ground with the legs hooked. Sasaki tries to reverse the leverage, but rolls too close to the ropes.

Both men are aware of what the other can do. Mutoh goes for Sasaki’s legs for a takedown, but Sasaki steps back, takes advantage of Mutoh going to ground and gets an armbar on. Mutoh tries to work up to a standing position but Sasaki is anticipating and takes him back down with a cross armbar attempt. Too close to the ropes on the way down and Mutoh escapes.

Another lock up looks imminent but Sasaki’s not interested and kicks Mutoh in the leg. Mutoh’s ok with strikes and hits a weak elbow before Sasaki tries a takedown. Mutoh catches him in a front facelock, takes him down and covers him for 1. Mutoh to the legs now. With the solid stocky build of Sasaki, taking out the strong power base of his legs is a sensible strategy. The leglock is working for Mutoh and he sits on top of Sasaki for leverage. Sasaki starts kicking and Mutoh breaks it. Sasaki rises and Mutoh hits a strong forearm. Shot into the corner and a handspring back elbow followed by a bulldog from Mutoh. Mutoh goes to the apron, gives NWO Japan leader Masahiro Chono the ‘too sweet’ hand signal, springs to the top rope and delivers a Missile dropkick. Could be a handy precedent for the Young Bucks to cite…

Mutoh takes Sasaki to the corner, seats him on the top and takes him down with a Frankensteiner. Sasaki rises to his feet and Mutoh is waiting with a dragon screw. Figure four applied and the champ is feeling it. He struggles but makes his way to the ropes for some respite. Mutoh back to leg for a dragon screw attempt, Sasaki fights him off and takes him down with a judo throw. Champ sends challenger to the ropes and another judo throw. Cover for 2. Mutoh up, Sasaki off the ropes and a hard lariat. Mutoh doesn’t go down, but the second one gets him there. 2. Sasaki with his signature Strangle Hold y (stepover armbar). Takes it down a butterfly lock attempt but can’t get it. Sasaki to his feet and Mutoh’s in trouble. Another lariat attempt is met with a low dropkick from Mutoh. The champ is hurting.

Sasaki back up, Mutoh dragon screw attempt, Sasaki fights it, lariat attempt, Mutoh blocks it and gets the dragon screw. Mutoh showing his experience edge in big match strategy. He allows Sasaki to get up which puts more pressure on the knee and follows it up with a targeted dropkick to it. A scream to assert his dominance and Mutoh repeats the rise and fall strategy with another dropkick to the knee. He gets knocked down, he gets back up again and he gets dragon screwed. Too sweet Mutoh, too sweet. Mutoh watches the champ rise back up again from the second turnbuckle and drills him with a missile dropkick to the knee. Mutoh in 1998 is a far better strategist than he was in the previous appearances he’s had in this project.

Sasaki back to his feet and is obviously sick of being exploited here, gets a gut shot in on the way up, but it’s for nothing. Dragon screw, figure four. Chono jumps up to the apron to shout advice to Mutoh. Or possibly referee Tiger Hattori. Nobody’s really interested though. Sasaki struggles to the ropes. Mutoh utilising almost all of the 5 count before breaking. Drags the champ out, and goes back to the figure four. Sasaki to the ropes again to break the hold and temporarily halt the punishment. Mutoh scoops him up for a backbreaker, and delivers a moonsault to the prone champion. For 2. Mutoh back outside, springs up and gets a missle dropkick. Sasaki is seated in the corner wearing his pain on his face and Mutoh zones in to continue the assault. Mutoh seats Sasaki on the top rope and tries another Frankensteiner. No luck as he’s caught with a powerbomb! Sasaki finally getting some momentum. An excellent display of fighting spirit from the wounded (Power) warrior. He picks up Mutoh for a brainbuster but the knee gives out. He tries the scoop variation (Northern Lights Bomb) and is able to distribute the weight to the healthy leg. Drops the challenger and continues the momentum shift. Adrenaline’s on his side as he fights through the pain, nails Mutoh with another for the one, the two and the three. Your winner and still champion after 25 minutes and 18 seconds, Kensuke Sasaki!