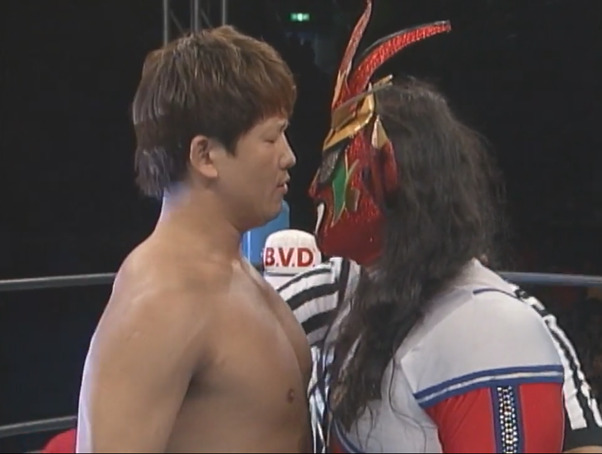 Last time we saw Jushin Thunder Liger was at 1997’s event where he defeated Ultimo Dragon for 8 belts (the J-Crown). One of those was of course the IWGP Junior Heavyweight title. This began his 8th reign with the title which he lost to El Samurai in July of that year. Samurai had a month before Shinjiro Otani, whom Liger beat in February 1998. 11 months later and this is Liger’s 7th defence.

Last time we saw Koji Kanemoto he was landing an awkward looking Shooting Star Press on young Yuji Nagata back in 1995. Since then he’s had a taste of the gold as well, coming into this matchup already a 2-time champion, having beaten Norio Honaga back in September 1994 and a month after losing it to him, beating Sabu (of all people) in June 1995. Kanemoto’s second reign was ended by none other than Jushin Thunder Liger.

The history between these two paints a rather uneven picture. They first clashed in April 1992 in the Top of Super Junior tournament where Liger was victorious. Liger would then go on to defeat Kanemoto another three times that year. Kanemoto got his first victory over Liger in May 1993 as the third Tiger Mask. Liger would take the next two battles, which included taking the mask from Kanemoto at the Tokyo Dome in 1994 (we were looking at Hashimoto and Chono from that event). Kanemoto got the next win in December 1995 but once the title was on the line a month later at the 1996 Tokyo Dome event (we had Mutoh and Takada from that one), Liger would take it away, just as he had taken the mask. February 1997 saw Liger keeping the gold away from Kanemoto when he successfully defended the J-Crown. The two would trade wins over the next few matches.

The 1998 Best of the Super Junior tournament was won by Koji Kanemoto who then once again came up short against defending Junior champion Jushin Liger. By this point the record was 11-4, heavily in Liger’s favour. And up to this point – Liger is undefeated in title matches between the two. Will that continue in 1999?

Kanemoto is introduced first and is taking the no nonsense approach with the traditional black trunks. Liger in the red and white he’s most well-known for. The defending champion parading over with in arms in the air to Kanemoto during the intro. He knows the score. The two are chest to chest and eye to eye. They separate for the referee’s checks and the bell rings. Circling each other to start. We’re off with a collar-and-elbow and Kanemoto pushes Liger straight back to the ropes. He’s straight onto the offence with a few punches and then a snap mare followed up by some kicks to the leg. Goes for a calf kick which Liger catches and turns into an ankle lock and Kanemoto’s on the ropes. Liger breaks it and then tries to break him with some stomps. Kanemoto’s not having a bar of it and is right back up in Liger’s face with a slap. They’re face to face and exchanging blows before Kanemoto takes him down with a chop and stands on his throat. A mask grab for a snapmare, a stomp and then he moves down for a leglock. Kanemoto lets it go after a few good shots, and stands up to deliver a few more. Picks Liger up by the hair and then kicks the leg to take him back down. Kanemoto traps the leg and gets a few more shots in. Up to a toe hold. Liger tries to break it by grabbing hair to no avail and Kanemoto moves on. Works it around to an inverted toe hold. Breaks it, throws Liger to the corner and kicks the leg a few more times. Kanemoto’s just having his way with the champ here until a kick is caught and Liger gets a dragon screw in. Looks like it took more out of Liger as Kanemoto is straight back up to stomp him in the head. Back to the legs. Liger gets on top of and starts throwing shots. Kanemoto’s fighting from his back though. Liger with a cross armbar attempt. Kanemoto rolls it around and goes back to the toe hold. Catches Liger with a front facelock while he keeps the toe hold. Breaks it in favour of kicking the crap out of Liger. A few kicks send the champ outside. Kanemoto’s not here to play. Liger’s trying to get back in the ring and Kanemoto is just daring him to do it. The referee creates a bit of space, just enough for Liger to get in and Kanemoto kicks the leg, as expected by this point.

Kanemoto showing nothing but disdain for the man who took his title. He picks Liger up, if for no other reason than to best kick his leg and takes down with his trademark ankle lock. Kanemoto popularised the hold or so I’ve heard through the grapevine he puts on with it here. He’s back up, and he’s back to kicking Liger. A handful of chops and Liger’s had enough of this. He fires back with a few Shotei palm strike. Sends Kanemoto to the ropes, tilt-a-whirl but Kanemoto lands on his feet, counters with one of his own and slams the champion down. Koji Kanemoto very much in control as he stands over the champ, and then gets a triangle choke on. Liger’s out of it and gets a modified version of the Romero special before taking that to a double armbar. Kanemoto breaks with the ropes. Liger breaks with a knee drop for good measure. Takes the challenger down and gets a headscissors on, mid-ring. Kanemoto’s stuck here as Liger works it around to a kimura hold and transitions that a double arm bar. Kanemoto is face down which makes all of this look a lot more impressive.

Kanemoto rolls out of this, but Liger stays on him with some stomps. Picks him up and keeps the arm going with an armbreaker. Over the corner and he’s thinking Liger Bomb. But Kanemoto’s thinking about kneeing him in the face. Body slam from Kanemoto who goes up and misses a corkscrew senton from the second. Rolling koppu kick from Liger which sends Kanemoto the corner. Liger runs in for attack – but Kanemoto catches him. Backhands to the champ. Another bodyslam and Kanemoto has another go at that senton. Successful this time. Drags Liger back to his feet by the mask, something he’s got to resent Liger for taking from him back in 1994. Tries to whip him cross-corner but Liger breaks the whip and Shotei! Kanemoto in the corner and Liger gets some room for a running Shotei to the back of the head. German suplex. Takes Kanemoto to corner, lifts him up and pulls off a Frankensteiner. Kanemoto rolls out to the apron where Liger catches a rolling koppu kick to knock him off. Liger climbs up and follows Kanemoto out with a flying body press from the top. Both men down outside. They’re up and Liger drops Kanemoto with a brainbuster on the floor! Liger back in, referee counting to 20. Doesn’t make it as Kanemoto makes it to the apron where he’s met by Liger and a Shotei. Liger off the ropes, Kanemoto in and cuts him off with a kick. Both men down again.

Liger with a wasitlock and attempts a German suplex, but Kanemoto lands on his feet. Kanemoto gets a belly-to-belly on the champ and goes straight to the ankle. Will Liger looks for ropes but Kanemoto keeps him away. Will he finally beat Liger for the belt?! Not with this as Liger finds ropes, but Kanemoto breaks just long enough to try again with a grapevine. Liger to ropes again and breaks.

Kanemoto picks him up and seats him backwards on the turnbuckles after a kick. Reverse rana attempt! Liger holds on and the challenger goes down. Liger turns around and rains down with a Shotei from the top. The champ is thinking Liger Bomb, but Kanemoto flows through the lift for a sunset flip into the corner pad. Kanemoto takes Liger up and brings him down with a super exploder suplex! Only 2. A scoop slam and a moonsault. Only 2. Kanemoto in the driver’s seat here but just can’t park the car. He’s not phased as he picks Liger up for a Tiger suplex. Liger kicks out at 1 and the Beast God is fired up! Liger with a tilt-a-whirl backbreaker and a Shotei while Kanemoto is draped across his knee! Whips him to the corner and follows him in. Shotei! Liger Bomb! 2 count! Takes him back to the corner, picks him up and it’s a super brainbuster! Kanemoto gets back to his feet through sheer fighting spirit and Liger takes him down with a Shotei to the back of the head. For 2!

Liger lines him up, another Shotei coming, but Kanemoto cuts him off, and then delivers one of his own! Both men slow to get back into it, but Kanemoto is in control. Grabs Liger by the mask, spits on him and slaps him. Any respect between these two is long gone. Positions the champ with a slam and goes to the top. Gets good height on a corkscrew senton and decides against a pin attempt. What’s he got in mind? Picks Liger up by the mask, throws him to corner and then takes him to the top. Looks like a possible Franksteiner but Liger cuts him off with…. A Shotei! It’s a long way down for Kanemoto. Liger puts Kanemoto in a similar position and it’s another super brainbuster! 1. 2. Kanemoto attempts to kick out but can’t get out. 3. As has been the case in every title match between these two so far, this time in 23:11… your winner and still IWGP Junior Heavyweight champion, Jushin. Thunder. Liger!

An amazing match between two of the top Junior Heavyweights in the country at this point. Liger’s career is legendary and his legacy wouldn’t be the same without these battles with Koji Kanemoto. The good news for Kanemoto, is he would get a rematch and finally slay his dragon. He beat Liger for the title the very next month.