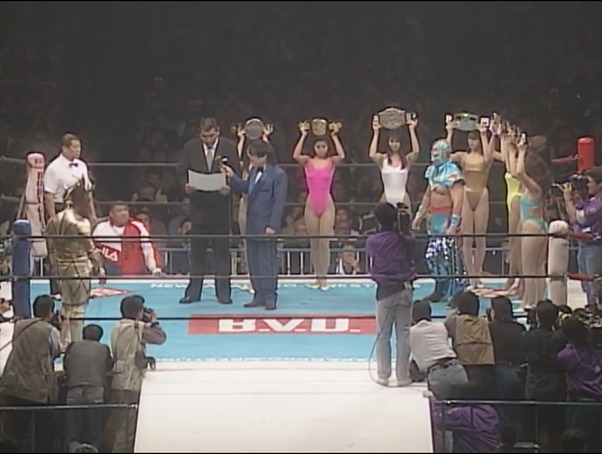 You know that famous shot of Ultimo Dragon holding 10 belts at once? Well 8 of those are what makes up the J-Crown – a short-lived unification of weight class limited titles between 8 different promotions. A knockout tournament was held in August 1996 featuring the following champions, defending the following titles.

The tournament was one by The Great Sasuke who defeated Ultimo Dragon in the final. Ultimo Dragon defeated Sasuke at a WAR event in October 1996. At this stage Ultimo was already the NWA World Middleweight Champion (a title he won at a WAR event in 1994) and managed to pick up the WCW World Cruiserweight title from Dean Malenko at WCW Starrcade in the last week of 1996.

January 4 rolls around and Ultimo Dragon is off to the Tokyo Dome with New Japan to defend the 8 belts that make up the J-Crown (was also supposed to be the WCW title but this didn’t eventuate) against the man behind the Super J Cup and one of the driving forces in this era of junior heavyweight, Jushin Thunder Liger.

Before we jump into the match, what is also worth noting from this event is that it was the debut of the Super Liger character. Intended to be a counterpart to Jushin Liger in the same way that Black Tiger is to Tiger Mask. The man under the mask was Chris Jericho. The same Chris Jericho that will be making his first NJPW appearance in 20 years against Kenny Omega at Wrestle Kingdom 12. Hopefully that goes a little better than his first NJPW appearance did here. In the words of Riki Choshu; “Chris Jericho very good. Super Liger very bad.”

Meanwhile back to the task at hand, it’s Ultimo Dragon, it’s Jushin Liger and it’s more titles than most guys would win in a career up to that point.

We’re in-ring for the introductions and Dragon has an entourage to display all of his gold. He does a quick stocktake and hands the belts over. Dragon is wearing the light blue that he typically wore during his time in WCW, Liger is sticking with a theme and wearing gold.

The bell rings and we’re off. The two men circle and lock up collar and elbow style. Liger takes Dragon to the corner, Dragon switches it and breaks clean. Back to the collar and elbow, Liger pushes Dragon to the ropes, gets a few good knee shots in and shoots him off. Dragon reverses, drop down, Liger slides under a leapfrog, Dragon hits the ropes, lands on his feet from a back body drop attempt, Liger dodges a spinning wheel kick, comes in for a Shotei palm strike which Dragon ducks and tries a waistlock, can’t get it but grabs a leg for a dragon screw attempt, Liger counters this to an enzuigiri which Dragon ducks. Dragon grabs a stray arm and attempts a Magistral cradle, but Liger escapes before he can get it on. A brief separation has Liger rushing back in but Dragon catches him a drop toe hold and has a bit more luck this time with the Magistral. The luck of a 1 count and Liger heads outside. Dragon hits the ropes and looks like he’s about to join him but pulls out at the last minute with an intimidating Tiger Feint kick. Now more commonly known as a 619 thanks to Rey Mysterio. Dragon looks to the fans and this is the first break in the opening sequence. These two world class juniors have come right out of the gates here at a hundred mile an hour pace.

Liger decides it’s time to come back inside, Dragon’s not too keen on that idea and meets him with a knee and a flurry of kicks on the way in. Whips him into the ropes, Liger reverses and Dragon falls victim to a tilt-a-whirl backbreaker. Liger’s in the driver’s seat now and hooks the legs, and after a fight the arms to apply the Romero Special (see surfboard). Dragon’s out and Liger gets him with a standing Liger Bomb. Goes back to holds with a single leg crab. Has a bit of an arm in there first before transitioning over to the more traditional crab. Too close to the ropes. Liger breaks, but not without an elbow drop on the way through, pulls Dragon away and tries a Camel Clutch. It’s quite effective and Liger takes it down into what may have been intended as a pin attempt but ends up quite a handy armbar. Liger finds ropes and then finds a snap mare. Liger follows it up with a seated abdominal stretch which he can roll around for a 1 count pin attempt. Dragon kicks out and grabs a toe hold, targeting Liger’s leg. Rolls him over, picks him up, sends him to the ropes and hits a drop kick. Liger’s too close to the ropes but Dragon decides to cover him anyway. Drags him away and back to the toe hold. Liger gets a leg around for a headscissors and gets into position for a cross armbar. Dragon rolls back to escape before Liger can lock it, ties up his legs in an inverted Indian deathlock and wrenches it. With a few uncharacteristic gyrations to keep the people happy. Liger heads towards the ropes but Dragon breaks the hold and gets a few stomps in before sending Liger to the ropes. Ducks down for something but only opens himself to a sunset flip. Pin attempt from Liger for 2. As both men rise, Dragon comes in with a small package for 2 and Liger works that around for a traditional cover (w/ leg hook). Dragon kicks out at 2.

Liger’s knee starting to give him grief which Dragon immediately kicks. Drags him closer to centre ring and gets a leglock on. Referee breaks it and both men separate. Or at least Ultimo Dragon does. Liger fires straight in backing him into a corner and it’s time for a strike exchange. Liger with some knife edge chops, Dragon with some overhand slaps and Liger decides the Shotei might be more effective. It is. Dragon’s reeling so Liger sends him across to the opposite corner and follows him with a rolling koppu kick. Dragon’s seated in the corner. Liger comes in with what looks like the early evolution of the ‘face wash’. Picks him up and tries to send him back to the opposite corner, Dragon reverses it and meets Liger in the corner with a monkey flip. A dropkick follows which gets Liger back to the corner and Dragon charges in with another monkey flip, Liger catches it this time and seats Dragon on the top rope. Good place to try and hit a Shotei. Good position to block the arm with a kick. Liger turns around Dragon comes off the top with a flying headscissors. Liger back to feet and Dragon hits a little short shoulder block to get some additional space, heads to the ropes and springs off with the Asai moonsault that he made famous (until Jericho called it a Lionsault and made it even more famous). Cover for 2. Dragon’s a bit shocked this didn’t work and tries a handspring back elbow to the now risen Liger. He’s caught with a German suplex. And caught well. Liger hesitates with a cover and gets 2. Picks him up, shoots him off, Dragon holds the ropes and avoids the front dropkick. Dragon decides to hit the ropes and is met with another koppu kick which sends him outside. Liger to the top and a body press to the outside takes Dragon down.

The referee starts to count Dragon out, but he makes it back in at 17. Liger is waiting for him with a few stomps. Sends him into the ropes, catches him with a kick to the midsection and takes him up for a Fisherman’s buster. Kick out at 2. Liger going for a more traditional brainbuster this time but Dragon grabs an arm and takes him to ground Crossface-style. Doesn’t grab a hold though, instead a Magistral for 2. Back up and Dragon ducks a shotei, heads for the ropes, flips out of a back drop attempt in his unique way. Liger to the ropes, slides under a leapfrog, Dragon to the ropes and a double lariat takes both men down.

Dragon’s the first up and charges with a lariat which Liger ducks and Dragon turns into a shotei! Liger covers for a long 2. Liger’s a bit unsure as to what will actually put him away, so he picks him and goes big by seating Dragon on the top rope. Frankensteiner attempted, but Liger falls to the mat in a heap. Dragon’s in prime position as Liger rises and is caught with a diving hurricanrana. Liger up and Dragon comes in for a more traditional hurracanrana, except a spin takes both men over the top rope. Dragon’s quickly back into the ring and feints a springboard with a backflip reminiscent of the Asai moonsault before a tope suicita that hits Liger flush. Dragon’s back in and climbs the ropes for a somersault senton to a now-standing (but not for long) Liger. They’re back in and Dragon hits a fallaway slam that positions Liger for a moonsault. Both men are up and Dragon goes for a Tiger suplex but Liger’s straight to the ropes. While there Dragon switches to a full nelson and pulls him away from the ropes where he gets his Tiger suplex. For 2. A tombstone piledriver is Dragon’s next move (hey it has a pretty good record on shows of this magnitude), but Liger reverses it into one of his own. Dragon happens to be perfectly positioned for Liger to ascend the ropes. Also perfectly positioned to get up and cut him off. Dragon follows him up and the two exchange strikes. Twisting frankensteiner takes the challenger down for 2. Dragon signals that it’s time to end it. Liger has other ideas as kicks out at 2 from Dragon’s version of the Running Liger Bomb – the Dragon Bomb. Dragon drops Liger with a little powerslam right on the B.V.D. logo in centre-ring and then proceeds to miss an Asai moonsault as Liger rolls away. Liger digs into Dragon’s bag of tricks with a Magistral for 2. Dragon seeks respite in the corner and Liger charges in to get booted in the mid-section. Time for another Dragon Bomb, time for a hurricanrana counter. Liger’s signalling it might be time to wrap this up and does so with a Brainbuster that landed more like a driver. It’s 3, and it’s a new champion in 18 minutes and 21 seconds.

This match is absolutely outstanding. Two legends in their primes showing why junior heavyweight wrestling in the 1990s is held in such high regard. A lot of the stuff these two used would go on to be adapted and used by others as they influenced the next generation.