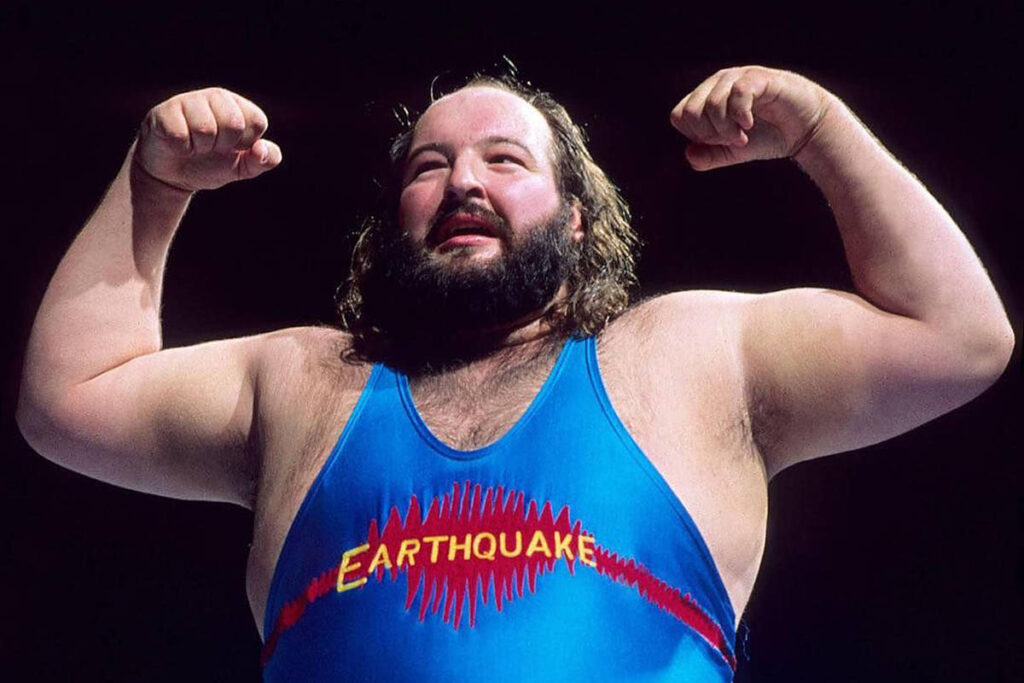 Born in Surrey, British Columbia, Canada, John Tenta pursued amateur wrestling at a young age, and was good enough to receive a scholarship to Louisiana State University (LSU), where he competed at NCAA collegiate level. He also played American football and rugby union, and was a bouncer at the college bar, The Bengal. Tenta got a large tattoo of a tiger – the chosen mascot of LSU – on his left bicep (this would create a couple of problems for him during his career).

In Toronto, Tenta met with a former yokozuna (grand champion) and in October 1985 joined the Sadogatake stable, run by Kotozakura Masakatsu. As per tradition, he took on the name “Kototenta” (Tenta the Harp).

Despite being a late starter at the age of twenty-two, Tenta took to the sport with the help of his 6’5″, 423 pound frame. The Japanese press gave him plenty of coverage, and nicknamed him “The Canadian Comet.” During his bouts, Tenta had to cover the large tiger tattoo, due to tattoos being frowned upon by the Sumo Association. Later he was renamed “Kototenzan” (Heavenly Mountain Harp), but after eight months, he quit the sport due to the hard lifestyle and toll it was taking on his body.

He turned to professional wrestling, and signed with All Japan. Tenta debuted on May 1, 1987, when he teamed with Giant Baba against Rusher Kimura and Goro Tsurumi in a winning effort, a bout that Tenta dominated. During this period, he made his North American debut with Al Tomko’s NWA All Star Wrestling in Vancouver, and became NWA Canadian Heavyweight champion on August 1, 1987, and later the UWA Heavyweight champion in September.

Tenta tagged with The Great Kabuki in the Real World Tag League Tournament from November 21-December 11, 1987, and scored six points (three wins). After an eighteen month stint with All Japan, he signed with the World Wrestling Federation in September, 1989. (Prior, he had worked two dark matches for the company).

For his first match under contract, he was named “Earthquake Evans” and managed by Slick when he defeated Paul Roma on September 21. He made his television debut in Wheeling, West Virginia as a fan on the November 11, 1989 edition of Superstars, when Dino Bravo’s manager Jimmy Hart ‘randomly’ picked him out of the audience to help in a strength contest with The Ultimate Warrior. ‘John from West Virginia’ sat on Bravo’s back as he did push-ups, which Bravo accomplished despite the massive weight. When Warrior attempted the same thing, ‘John’ lowered the boom on Warrior.

Now recognised as a professional wrestler and with Jimmy Hart as his manager, Tenta became “Canadian Earthquake,” with Dino Bravo in his corner.  His first pay-per-view appearance was at the November 23, 1989 Survivor Series as a member of Randy Savage’s “King’s Court”; he survived along with Savage and Bravo.

Tenta’s main offensive weapon was a sit-down splash onto a fallen opponent’s chest, which was sold as a deadly and dangerous move. By the time he got to Wrestlemania VI on April 1, 1990 for his match with Hercules, play-by-play commentator Gorilla Monsoon claimed that he had put twenty-eight men in the hospital. Now known simply as “Earthquake,” he had little trouble dispatching Hercules.

The following month, Tenta entered into the most famous rivalry of his career when he attacked and injured Hulk Hogan during a segment of “The Brother Love Show.” Hogan was put out of action and even teased retirement. Hulk finally returned for Summerslam on August 27, 1990, where he defeated Earthquake by count-out. For the next several months, the two feuded with Hogan regularly getting the upper hand. Earthquake and Hogan were the final two in the January 19, 1991 Royal Rumble, which Hogan won.

After a decisive victory over Greg Valentine at Wrestlemania VII on March 24, Tenta returned to Japan for Super World of Sports. On March 30 in the Tokyo Dome, he got by another former sumo now pro wrestler, Koji Kitao. Then, on April 1 in Kobe, the two worked against each other again, with a very different conclusion. Not long into the bout, Kitao got aggressive and refused to sell any of Tenta’s offence. After several more minutes, Kitao got himself disqualified by kicking the referee to the disgust of the crowd. {For a more in-depth look, check out our article The Kobe Sumo Shoot}

Back in the WWF, Earthquake went after Jake “The Snake” Roberts on the April 27, 1991 edition of Superstars. During the match, Jake’s arms became tied in the ropes, and Earthquake took the opportunity to go after the green bag containing Jake’s python, Damien. With Jake looking on, Earthquake proceeded to squash Damien with a series of his sit-down splashes. When Jake was freed, he went to the bag and recoiled in horror.

A few weeks later on Prime Time Wrestling, hosts Vince McMahon, Lord Alfred Hayes and Bobby “The Brain” Heenan were served “Quakeburgers.” After each got a taste – especially Heenan who ate several of them – Earthquake revealed that the meat in the burger was Damien. Around this same time, he injured Andre the Giant’s leg when the Giant refused to take on Jimmy Hart as a manager. Earthquake then had to contend with Andre being in Jake’s corner for their series of bouts through late spring/summer.

In the middle of 1991, Earthquake turned to tag team competition as one-half of the formidable team, The Natural Disasters. On the June 15, 1991 edition of Superstars, Tugboat turned on his partners The Bushwhackers in a six-man tag against Earthquake and The Nasty Boys. On the June 17 episode of Prime Time Wrestling, Jimmy Hart brought out the newly named Typhoon. They entered into a rivalry with WWF Tag Team champions The Legion of Doom, but were unsuccessful in defeating them for the belts; the closest they came was a count-out win at the 1992 Royal Rumble.

They became fan favourites when Jimmy Hart left them for Money Inc. When Hart’s new team became Tag Team champions, The Natural Disasters challenged them at Wrestlemania VIII, and won by count-out. They did go on the defeat them for the titles, only to drop them back to Money Inc. a short time later.

Earthquake participated in the 1993 Royal Rumble and made a good account of himself – even going after and eliminating his tag team partner Typhoon – before himself being thrown out by eventual winner, the ironically named Yokozuna. Right after the Rumble, Tenta left the WWF to wrestle in Japan and Mexico for WAR and CMLL, respectively.

In January 1994, Earthquake returned to the WWF when he stood in the corner of Bret Hart during a match with Shawn Michaels to counter the interference of Michaels’ bodyguard, Diesel. At Wrestlemania X on March 20, he defeated Adam Bomb in under a minute, and entered into a feud with Yokozuna. Tenta’s history as a sumo was discussed on television, which led to a sumo match between the two super-heavyweights, which Tenta won.

On the May 14, 1994 house show in San Jose, California, Tenta was injured by Yokozuna and Crush as he was set to face Owen Hart in a King of the Ring qualifying match; not long after, Tenta left the company again, and went back to Japan for WAR. In the lead-up to signing with World Championship Wrestling, Tenta worked a tour with UWF-i, where he teamed with Super Vader.

Tenta appeared in WCW, initially under the name “Avalanche,” where he teamed with Kevin Sullivan and The Butcher (Ed Leslie) as “The Three Faces of Fear.” They primarily feuded with Hulk Hogan, and Hogan’s allies Randy Savage and Sting. In the main event of Clash of the Champions XXIX on November 16, 1994, Avalanche, Kevin Sullivan and The Butcher lost to Hogan, Sting and Dave Sullivan in the main event, and at Starrcade on December 27, Avalanche lost to Sting by disqualification. After continued losses, Sullivan turned on Avalanche and The Butcher, but still enlisted them into his Dungeon of Doom faction a short time later. When the WWF issued a lawsuit over the Avalanche name, Tenta became known as “The Shark.”

Due to the nature of the new gimmick, in which he wore face paint that looked like sharp teeth and had a shark on his tights, Tenta decided to ink over the tiger tattoo. Unfortunately, the gimmick was wound up few months later, but Tenta always maintained it was his call, and never felt pressured by WCW management.

In the WarGames match at Fall Brawl on September 17, 1995, The Shark was a member of the Dungeon of Doom team that lost to The Hulkamanics; he also failed to defeat Sting for the US Title on the October 9 Nitro. A few months later, he was removed from The Dungeon of Doom, and challenged The Giant on the May 27, 1996 Nitro for the WCW World Heavyweight Title in a losing effort.

In an interview with Mean Gene Okerlund on Nitro, he reverted to using his real name. He entered into a feud with Big Bubba Rogers and defeated him at Great American Bash on June 16, only to have Rogers cut his goatee. Tenta gained some revenge on Rogers by cutting his beard, but right before the rematch on the July 7 Bash at the Beach pay-per-view, Tenta fell again to The Giant, after-which Bubba shaved half of Tenta’s beard. Refusing to fix it until the Bash pay-per-view, Tenta defeated Bubba in a “Carson City Silver Dollar” match.

Tenta’s next – and final – WCW storyline involved Rowdy Roddy Piper looking for partners for the Uncensored pay-per-view against the New World Order. Tenta became a part of Piper’s ‘family’ along with two unknowns (Craig Mally and Layton Morrison), but the idea was quickly dropped on the March 10, 1997 Nitro when Piper chose to align with The Four Horsemen. (In the promo on Nitro, Arn Anderson made reference to Piper’s ‘family’ as a “bunch of amateurs,” which legitimately enraged Tenta, who had no idea the storyline was being dropped). Originally set to be in the main event of Uncensored, Tenta was not even booked and left the company soon after.

Tenta re-appeared in the WWF on the May 25, 1998 edition of RAW as the masked Golga, a member of The Oddities faction, and brought a stuffed Eric Cartman toy to the ring. The group were popular babyfaces and secured victories over teams such as Kaientai, The Headbangers, and Los Boricuas. At the Rock Bottom pay-per-view on December 13, 1998, The Oddities lost to The Headbangers when their stablemates the Insane Clown Posse turned on them.

Tenta took part in the 1999 Royal Rumble but was quickly eliminated by Stonecold Steve Austin; shortly after, the faction was quietly wound up with all members released from the company. Tenta made a brief return in 2001 as Earthquake, and appeared in the Gimmick Battle Royal at Wrestlemania X-7 on April 1.

Sadly, in 2004, Tenta retired and announced he had bladder cancer; treatment did not help and it spread to his lungs. On June 7, 2006, WWE.com announced that John Tenta had passed away, and was acknowledged on the proceeding editions of RAW and Smackdown.