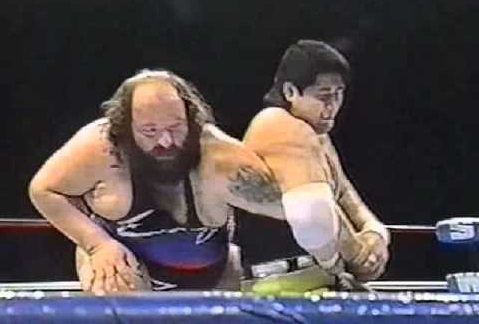 There seems to be some confusion about exactly WHEN Earthquake (John Tenta) had his “shoot” with Koji Kitao in Japan. Some sources – even JJ Dillon in his book Wrestlers are Like Seagulls – claim that it occurred in the Toyko Dome on March 30; it didn’t. While Tenta and Kitao did have a match, it was perfectly fine, and showed no signs of what would go down the following night in Ariake Coliseum.

Super World of Sports (SWS) was a short-lived Japanese promotion that started up in April 1990. The Japanese wrestling scene was doing well in the early 1990s – as opposed to in the United States where WWF and WCW were struggling – with several companies presenting their own unique product, and drawing big crowds.

Megane Super was a well known eye-glass manufacturer in Japan, and after gaining the services of All Japan star Genichiro Tenryu as a spokesperson, decided to go all the way and start their own company. Drawing on their resources, they convinced a number of All Japan and New Japan wrestlers to defect, earning the ire of the aforementioned promotions, who considered them the equivalent of “money marks.”

In October, SWS pulled off a coup by signing a working agreement with Vince McMahon’s World Wrestling Federation, and led to Wrestlefest 1991 on March 30, an SWS/WWF combined show in the Tokyo Dome. The WWF boys stuck around and their next stop was Ariake Coliseum in Kobe, which is where our story gets more interesting.

Before signing with All Japan in 1987, John Tenta was a sumo wrestler. He did reasonably well, and stood out since he was a “westerner;” the Japanese press nicknamed him “The Canadian Comet.” After an eight month stint, he turned to professional wrestling, first with All Japan and then with the WWF in 1989. For a more in-depth look at his career, check out our profile of him.

Kitao on the other hand, had a much more celebrated career as a sumo, attaining the title of yokozuna (grand champion). However, he was a controversial character who was booted from the profession by the Sumo Association after an argument with his stable boss Tatsunami, which led to Kitao allegedly striking Tatsunami’s wife. (According to the record, he was also a very underwhelming yokozuna, unable to win a championship after the promotion to grand champion). Just like Tenta, he moved on from sumo in 1987, and after briefly working for Verne Gagne’s AWA in 1989, he debuted for New Japan the following year.

Also like Tenta, Kitao was booked as a monster in professional wrestling and teamed with Tenryu, himself a former sumo. He went to SWS in November 1990, and several days after getting a victory at Wrestlemania VII over Demolition (with Tenryu as his partner), he was booked against Tenta at Wrestlefest 1991. The match went smoothly, and Kitao lost the bout as planned. But apparently, Kitao was unhappy about losing a second time, feeling that as a yokozuna, it would be a disgrace to lose again to Earthquake, who never did reach those heights.

Unlike the bout in Tokyo, this one gets ugly quickly. Koji tried for a standing armbar which caused Tenta to lash out. There were awkward pauses, and Kitao clearly not wanting to co-operate. Koji then motioned like he was going to gouge Quake’s eyes, as Tenta got incredibly irate, screaming at Kitao if he wanted to “work or shoot.” Koji then delivered a stiff kick to the referee to get himself disqualified. After Tenta raised his arms and left the ring, Kitao got on the microphone and declared that pro wrestling was fake, and that Tenta could not have beaten him in a real fight; not surprisingly, he was immediately fired.

[As a side note to all this, SWS booker The Great Kabuki – who also wrestled high up on the card – was relegated and fired himself as booker when it was discovered by officials that he had urged Tenta to ‘work stiff’ in their March 30 bout. This was likely due to Kitao’s aforementioned complaining of having to put Tenta ‘over,’ and so hoped it would rile up Kitao to do something stupid; it worked].

Despite getting hot and losing his temper, Tenta handled the situation well, so unlike other instances – such as the Antonio Inoki/Great Antonio shoot – it did not lead to bloodshed. Although Kitao clearly was in the wrong, even going so far as declaring pro wrestling “fake,” he was not completely blacklisted. After gaining a black belt in Karate, he turned up in 1992 with UWF-i, known for their shoot-style matches. Again he was heavily pushed and got a bout with top star and champion, Nobuhiko Takada. In a move that would have brought a smile to more than a few in the industry, Takada is said to have ‘double-crossed’ Kitao by knocking him out with a kick to the head, when the bout was meant to go to a draw.

Interestingly, when SWS wound up in 1992, Tenryu went on to start a new promotion – WAR, and decided to bring in Kitao. Even more interestingly, he was booked against Tenta again on December 13, 1996. According to this report, “Kitao threw so many kicks in this match…they all looked like complete sh*t.” After going outside the ring, Tenta hit the Earthquake splash in the ring which Kitao kicked out of “before Kitao threw more kicks and pinned him with a lariat. Everyone booed this…” Tenta again was commended for being a professional, and going along with whatever Kitao was attempting to do.