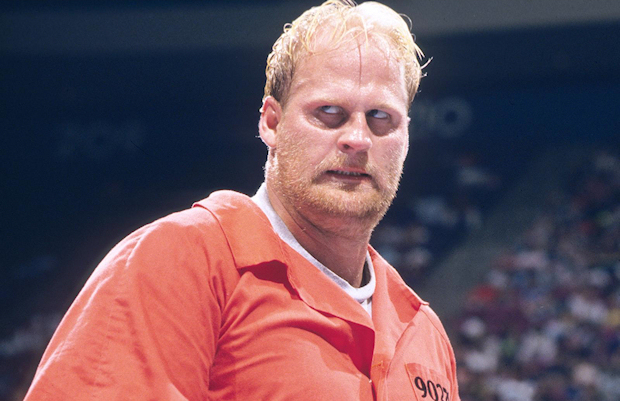 Kevin Walcholz (Nailz) first arrived in the World Wrestling Federation in May 1992, and immediately went after the Big Bossman. The backstory of his character was that he was an ex-convict, who served time in Cobb County, Georgia, where Bossman was a prison guard. He claimed he was wrongly convicted and that Bossman beat him regularly. In his debut on WWF Superstars, he viciously assaulted Bossman with a nightstick.

In promos, his voice was angry and gravelly, which was altered to sound even more menacing. He had to be barely recognisable to any fans who knew him previously as ‘Mr. Magnificent’ Kevin Kelly in the American Wrestling Association, where he showed off his muscular physique, acted flamboyantly, and was managed by Sherri Martel.

The incident between Walcholz and Vince McMahon took place on December 14, 1992 at a television taping in Green Bay, Wisconsin, in Vince’s backstage office. Walcholz was said to be angered by his pay-off from Survivor Series, where he battled Bossman in a ‘nightstick’ match. Gene Okerlund related his version of what happened when asked during a shoot interview with RF Video: “I heard a lot of screaming and shouting. I think it opened up with, ‘are you kidding me? (You’ve) given Big Boss Man twenty-five thousand (dollars) and given me eight thousand (dollars)? Take this check back!’ And then it got into a squabble.”

​Hearing the commotion, officials and wrestlers burst through the door to save McMahon, who was on the floor being choked out. Right after the fight was broken up, Nailz phoned police and alleged McMahon had sexually assaulted him. Not surprisingly, he was immediately fired. (Ironically, he may have missed out on some big pay-days, as the company was setting up a potential feud with The Undertaker before his untimely release).

He filed a wrongful termination suit, but it was thrown out, as was a counter-suit from the WWF. Walcholz was brought in as a witness during the WWF steroid trials, but he inadvertently helped his former employer by stating he hated McMahon’s guts, and was found to be far from a credible witness.

After the WWF, Nailz signed with World Championship Wrestling, where he was called “The Prisoner” and hailed from Green Bay, Wisconsin. Some reports say he signed a multi-year deal, but only worked one match, a loss to Sting at Slamboree 1993. Walcholz also worked a tour for New Japan, where he had a universally panned match with El Gigante. He later worked for the American Wrestling Federation in 1996 and in 1998, came to Australia for the short-lived High Risk Championship Wrestling. He retired in 2000.