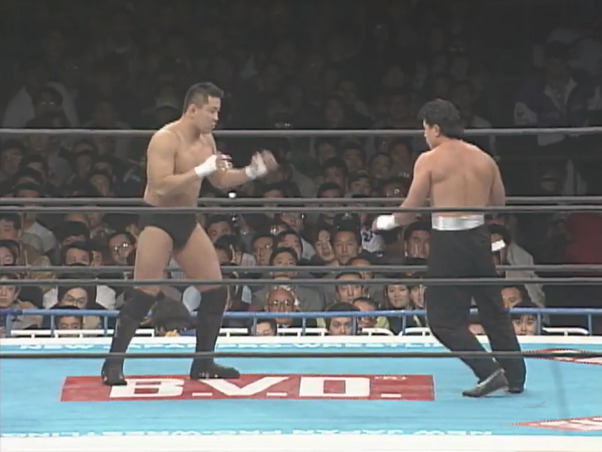 We make a departure from the IWGP Heavyweight title picture for 1995 and head to the undercard as the third Tiger Mask battles young Yuji Nagata. Kanemoto was one of Jushin Liger’s top dance partners through the 1990s and was an important part in building the IWGP Junior Heavyweight title to the heights that it reached during that time. Nagata was a successful amateur wrestler who representing Japan at the World Championships. Since graduating from the New Japan dojo in 1992 he had been toiling away as a young lion.

The two begin with a handshake showing respect and then each tries to catch the other with kicks. Nagata misses some palm strikes and Kanemoto catches a kick. Nagata rolls with the takedown attempt and neither man gets an advantage. Nagata again throws kick and backs Kanemoto up. A belly-to-belly takedown by Nagata and Kanemoto goes for a headscissors which is escaped. They’re back up and Nagata again employs some striking, trying to land one to effect. Kanemoto knocks him down with a spinning back kick and then gains an advantage. He slams Nagata to ground and hits a moonsault for 2. Nagata rises to some chest kicks but catches the fourth and turns it into an exploder suplex.

Follows it up with kick, including one to the back of the head. Nagata takes him down with a hammerlock. Comes out to a wristlock and then steps over for an armbar. Kanemoto works it around to a leglock, and some boots to the face attempt to break it. He breaks the hold and then follows it up with a series of kicks. Kanemoto raising the intensity here. Nagata is up and catches Kanemoto with a clutch and some knees. An enzuigiri puts Kanemoto to his knees and Nagata grabs a sleeper. Kanemoto tries to break it by going for a leg, but Nagata turns it over to a armbar. The positioning isn’t effective as Kanemoto can apply a leglock. Nagata tries something that looks like half a sharpshooter but it doesn’t work and he breaks Kanemoto’s hold with the ropes. Once apart Nagata uses his amateur background to wrestle Kanemoto to ground and tries to cinch in a wristlock. It doesn’t lock but the follow-up armbar does. Too close to the ropes however. Back to the BVD logo in the centre of the ring and Nagata tries again. He leaves the leg open though and Kanemoto is back to the leglock. Nagata meets it with an ankle lock but Kanemoto keeps his hold. And delivers some boots to Nagata’s head for good measure. They roll it towards the rope and the hold is broken. Nagata drags Kanemoto back to centre ring and gets on a toe hold. Follows it up with a leg bar. Kanemoto tries to break the grip but it’s not effective. Not as effective as digging his elbow into Nagata’s face and mounting him with a top wristlock.

This turns into a cross armbar after a bit of a struggle, but Nagata finds ropes almost immediately. A low kick from Nagata, two high, one to the back of the head and a German suplex for two. Nagata hesitates just slightly after the kickout and the more experienced Kanemoto takes the opening with a kimura. Nagata to the ropes. Kanemoto attempts a full nelson but quickly realises it won’t work on the bigger Nagata and gets him in a Fujiwara armbar. Nagata again to the ropes. Another go at the full nelson and Nagata takes him down with a rear chinlock. Kanemoto finds the ropes, Nagata finds some kicks, a German suplex and a two count. Crossface chickenwing attempt from Nagata who can’t quite get the crossface part before Kanemoto finds the ropes. After a few stomps Nagata pulls him up, whips him to the ropes, and hits an overhead belly-to-belly. This time he gets the full crossface chickenwing in and things look grim for Kanemoto. Until he gets to the ropes. Nagata lands a few kicks and bounces off the ropes, only for a Kanemoto dropkick to turn things around. Kanemoto with a sidekick, slap, sidekick combination takes Nagata to ground. Kanemoto heads up and comes off the top with a rolling wheel kick. Hits a brainbuster on Nagata and attempts a Shooting Star Press. Under-rotates it and lands rather awkwardly, but it’s enough to put Nagata away. After 14 minutes and 43 seconds… Koji Kanemoto is the winner.

A valiant effort from the young lion Nagata. I wonder what will become of him.