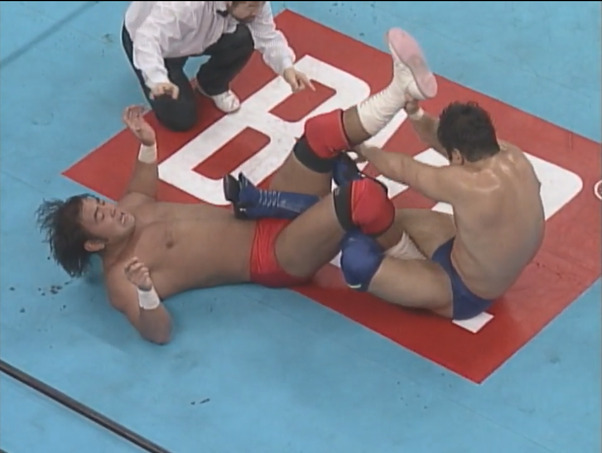 Back in August 1995, New Japan Pro Wrestling found itself in the midst of an invasion. The shoot style Union of Wrestling Forces International (UWFi), led by Nobuhiko Takada claimed that New Japan was fake and they were real. Note the use of the phrase ‘shoot style’ here. UWFi was still professional wrestling, just presented differently. The 1996 Tokyo Dome event, Wrestling World saw a NJPW vs UWFi theme as the two organisations battled for control. There were three NJPW vs UWFi matches and with a six-man tag victory (featuring that young lion Nagata from yesterday) and a Riki Choshu win over Masahito Kakihara, New Japan won the series on points. But the main event was for something more important than points. The IWGP Heavyweight Championship.

Following the Hashimoto/Chono match from 1994’s event – Shinya Hashimoto would lose the belt to Tatsumi Fujinami for a month before claiming it back for his second reign. Hashimoto’s second reign broke the one-year mark before he lost it to Keiji Mutoh. Mutoh is in his second reign here defending against Takada.

The bell rings and we’re off, Mutoh circles Takada for a bit before Takada throws the first shot, a low kick. Goes for a mid kick and Mutoh attempts to catch. Takada’s strategy is throwing kicks early on but Mutoh is out of range. Mutoh attempts a spinning back kick which is more for show than anything. They go for a test of strength which Takada sees as the perfect opening to throw some kicks and a slap in. Mutoh grabs a leg and takes it to the corner. The referee’s got to work a break and Mutoh throws a slap of his own on the way out. Back to centre ring and they toy with locking up again. Takada goes for a kick to the chest which Mutoh catches and eventually wrestles his way to a front facelock. The two go to ground and exchange some holds before Mutoh settles on a waistlock. Goes for an armbar but Takada doesn’t let him lock it and works around for a mount and goes for what looks like a kimura. Mutoh grapevines and Takada is on top. A great position to sneak a few slaps in. Mutoh gets him to ground and winds up on top.

He breaks off and goes to the ropes but Takada’s positioning is too good for it to be of any use. Back to ground with Mutoh on top. They’re now in centre-ring. Takada gets on top and goes for a front facelock. Works this around to the leg and Mutoh gets an arm. Goes for a judo throw, doesn’t work and finds himself at Takada’s legs. This is a very different match than what we’ve been accustomed to so far in this journey. All this shoot style wrestling and Mutoh tries to bust out a figure four leglock. Yeah no. Back to a standing position and Mutoh feigns a spinning back kick, tries to get in with a single leg. It doesn’t really work. They’re facing off again and each is having a go at trying to land some kicks, Takada is not very effective, but looks far better at this kicking game than Mutoh. They’re wrestling again and Mutoh goes to ground with Takada on top in an almost headlock position. Takada tries to add to this and get something happening with the arm, but Mutoh has pro wrestling on his mind and rolls Takada back for a pin attempt.

Takada works to a lateral press position and tries a kimura. Mutoh’s not really interested. Mutoh grapevines him, and he works out of it to a better position. He’s got a wristlock on and transitions it down to what is accepted as the pro wrestling version of a kimura. Almost. After realising Mutoh’s not real keen on being caught in the hold he swings around to try a cross armbreaker. It’s a nope again from Mutoh who by this point has had a gutful and breaks it up with some fiery headbutts, stomps and his flashing elbow. Mutoh drags him up which puts him in a better position for two knees and spinning back kicks. Takes him down with a backdrop which sets up for a moonsault. Mutoh connects and rather than trying a pinfall victory, he attempts a to serve the shoot style pioneer with that kimura he didn’t want earlier and after realising Takada’s priorities lay in applying the hold rather than receiving, swings around for a cross armbar. Takada finds ropes and Mutoh’s gotta be regretting trying to play submission specialist here.

Takada fires up with a series of kicks, a backdrop and a grapevine toe hold. Mutoh’s in big trouble here. He finds the ropes. Takada breaks the hold and then assaults Mutoh with a barrage of kicks. Mutoh’s down and the referee’s counting. He fights his way back up to be met with a kick. He catches the followup and takes Takada down with a dragon screw. Now seems like an opportune time for the figure four leglock and he gets it in. Adrenaline’s pumping for Mutoh who’s giving the hold all he’s got. Takada’s hunting for the ropes and eventually gets there. He rises and Mutoh goes back to the leg trying to get a takedown. He gets Takada down with another dragon screw and then goes back to the figure four. Takada’s figured it out though and through it, grabs the toe hold from earlier. To the ropes.

Takada to the corner and Mutoh on offence, going for this dragon screw again perhaps. Again Takada’s figured him out – gets a few knees in and takes mutoh fown with a judo throw. Perfect position for the cross armbreaker, perfect position for Mutoh to roll to the ropes. Mutoh back the leg, met with the knee again. Taken down with a few kicks and Takada’s back to the cross armbar. Mutoh’s done. The winner and 18th IWGP Heavyweight Champion in 17 and 51, Nobuhiko Takada.

New Japan may have won the night on points, but Takada won the prize. Post-match Takada calls out Hashimoto who has been watching from ringside and the two are nose to nose. The tension is real here as UWFi guys and NJPW guys surround them. They separate and Takada is carried on the shoulders of his boys. A taped up Antonio Inoki is in the ring, calls Takada back for a congratulatory handshake before the new champ and co. head to the back. Inoki is left to close the show and send the crowd home on a high after watching the invaders leave victorious.

As mentioned in the 1994 article, the Takada/Hashimoto follow up to this in April is amazing. http://njpwworld.com/p/s_series_00143_1_1

The crowd was electric throughout the match and the atmosphere around the event spectacular. The three Tokyo Dome events that this program spanned each drew 64,000+, including 67,000 in October 1995 to set the record as the largest crowd (and gate) in puroresu history at the time. The success of the program inspired a similar invasion in the U.S. I am talking of course, about the New World Order.