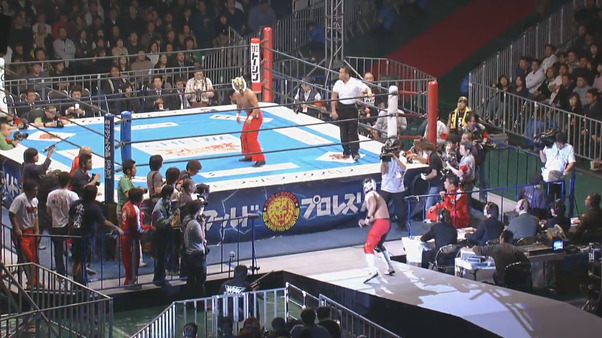 During the company’s fascination with MMA and shoot wrestling, there was one junior heavyweight that thrived on it. Minoru Tanaka made his debut in the shoot style Pro Wrestling Fujiwara Gumi promotion where he was trained by the first graduate of the NJPW Dojo, Yoshiaki Fujiwara. In 1996 Tanaka joined the Fujiwara Gumi roster in leaving their leader and forming Battlarts. Tanaka would end up in New Japan, making his debut in April 1999.

Minoru Tanaka would win the IWGP Junior Heavyweight title twice under his own name (defeating Tatsuhito Takaiwa for his first reign and then Masahito Kakihara to win the vacant title). In 2002 he would don a mask and become the character ‘Heat’. Heat was the main character of the GameBoy Advance game ‘Toukon Heat’ (think the Suicide character from the ‘TNA Impact!’ game). NJPW had found success with crossover characters before, with both the Jushin Liger and Tiger Mask characters being born from anime. Heat didn’t quite have the same success.

Tiger Mask of course was a highly successful crossover character and here in 2005 we have the fourth incarnation. Yoshihiro Yamazaki was trained by The Great Sasuke and the original Tiger Mask, Satoru Sayama. Yamazaki debuted as Tiger Mask in 1995 for Michinoku Pro Wrestling and joined New Japan in 2002. First as a guest, and then later in the year committing full time. Tiger Mask defeated Koji Kanemoto (the man who had the character before Yamazaki) for the IWGP Junior Heavyweight title in April 2003 (it was then vacated to be decided in a battle royal) and then again in the finals of the June 2004 Best of the Super Juniors tournament. He would go on to challenge Heat for the IWGP Junior Heavyweight title in July but was unsuccessful. Tiger Mask had defeated Heat during the block stage and the semi-final of the tournament. Can he recapture the magic, and the IWGP Junior Heavyweight title?

We’re introduced to the two and once the ring jacket is off we can see that Heat has a taped shoulder. As they often say, it’s a huge bullseye and a target for Tiger Mask. He obviously thinks so too because as soon as the bell is rung he aims a dropkick right there. Shoots Heat off the ropes and meets him in the middle with another dropkick that sends him to the outside. Tiger’s gonna fly and comes through the ropes with a tope suicita. That sends Heat staggering up the ramp. Tiger’s back in the ring and looks to try another one, but pulls out with the trademark Tiger Mask Tiger feint.

He instead decides to go over with a slingshot press, but Heat moves and Tiger lands on his feet. The two are battling on the outside and Tiger takes a small advantage to try an Asai moonsault but is pulled off the apron before he gets too carried away. Heat drags up the ramp and tries a fisherman’s buster on it. Doesn’t get it, but instead tries a brainbuster. Tiger gets out of it but stumbles and ends up falling off the ramp. Heat follows him down with a little bit more assault and then returns to the ring. Tiger staggers to the ring having taken a nasty fall.

Heat catches him on the apron and chokes him over the top rope from the inside. Referee breaks it up and Heat pulls Tiger back in. Snap suplex and a knee drop or two. Heat’s working him over here with a few elbows to the back of the head and then locks in a camel clutch. Tiger Mask being humbled here. The hold’s not going to draw a submission so Heat works around and transitions through some headlocks before getting a guillotine choke on. Tiger backs towards the ropes. Heat utilising as much of the five count as possible before breaking. Heat in control here and just having his way with Tiger. Gets a few strikes in and then goes back to the guillotine choke. Tiger again to the ropes. Heat again reluctant to let go.

Tiger tries to get back to his feet but Heat is taking great delight in cutting him off. Heat off the ropes and met with a dropkick! Three dropkicks in quick succession and Tiger’s night is looking a little better. Tiger off the ropes to mount some offence but cutoff with a kick to the gut by Heat. Backdrop attempt, Tiger flips out, Heat off the ropes and a tilt-a-whirl backbreaker from Tiger Mask. Tiger sends him to the corner and follows him in with a roundhouse kick. Tiger Bomb! For 2.

Tiger picks him up, sends him to the ropes but is reversed, flips out of a backdrop attempt and the two exchange kicks with Heat having the better one (a spinning back kick). Heat with a waistlock, Tiger fights it off and hits the ropes, comes in and gets hit by a roundhouse kick and a Liger-esque Shotei. High angled backdrop from Heat. Follows it up with another one. And third time’s a charm. Tiger’s in trouble.

Heat seats him on the top turnbuckle and follows him up for a superplex. Superplex attempt. Tiger fights him off and tries to get a dropkick. Heat meets him with one of his own but neither man is anywhere near landing their kick. Tiger falls hard though and Heat’s back in control. Fisherman’s suplex from Heat. Goes for another Shotei-esque palm strike but Tiger catches him and gets a backslide. The angle is too high though and Heat rolls through. Both men stand and Tiger ducks a roundhouse catching Heat from behind with a bridging lucha roll up for 2. Both men up and this time it’s Tiger Mask who connects with a roundhouse that drops Heat. Tiger in control and slams Heat in the middle of the ring. Heads to the top and misses with a diving headbutt. Heat back up and lays out the seated Tiger with a roundhouse kick.

Full nelson from Heat in what looks like a dragon suplex attempt, can’t get it so he goes to the waist for a German. Tiger lands on his feet (as cats are prone to do) and rushes in to meet a roundhouse. Tiger throws a clothesline which Heat catches and gets his dragon suplex after all. Heat props Tiger up and lets out a roar, indicating it’s time to end this. Delivers a particularly brutal looking roundhouse kick to the challenger which sends him crashing to the mat. Leg hook and cover for the 1, 2… kick out?!

Heat’s got more where that come from and picks Tiger up for a wrist-clutch fisherman buster but he can’t get him over and Tiger swings through turning it into an inside cradle. 2 count. Heat comes back with a kick that Tiger catches and he’s fallen victim to the Heat Clutch as it’s just a setup for a cross armbar. Tiger is rather close to the ropes here and needs to get there or he’s done. It takes him a while to figure out where he is, but he does get there.

Both men back to standing and after absorbing a few kicks, Tiger catches one. Not leaving himself open for another Heat Clutch he turns into a dragon screw pretty quickly. German suplex from Tiger Mask for 2. He follows this up with a standing moonsault that ends up being mostly knees when he lands, for 2. Tiger comes in with a roundhouse but the champion ducks it and returns fire with an enzuigiri. Heat comes off the ropes and is caught in the middle with a tilt-a-whirl pickup tombstone piledriver. Tiger goes to that taped shoulder and follows it up with a crossface chickenwing. Heat battles to a standing position and Tiger decides it’s a good setup for a suplex, throwing him back over his head. Tiger picks him and takes him back down again, this time with a trademark Tiger suplex. 1, 2, 3 it’s enough to end it. The winner and 47th IWGP Junior Heavyweight champion in 14 minutes and 17 seconds – Tiger Mask!

Following this loss, Minoru Tanaka would drop the mask and go back to wrestling under his real name. Billed simply as Minoru, he would go on to capture the IWGP Junior Heavyweight title once more in 2006 (four reigns in total) before leaving the promotion in 2009. He spent some time in All Japan before leaving in the exodus that formed Wrestle-1. He would return to All Japan a few years later, operating as a freelancer.

Tiger Mask would continue to be a staple of the New Japan junior heavyweight division, battling with three incarnations of the Black Tiger character (IV – Rocky Romero, V – Tatsuhito Takaiwa, and VI – Tomohiro Ishii). He would go on to capture the IWGP Junior Heavyweight title a total of six times and now fills a senior role in the division where he frequently tags with Jushin Thunder Liger.