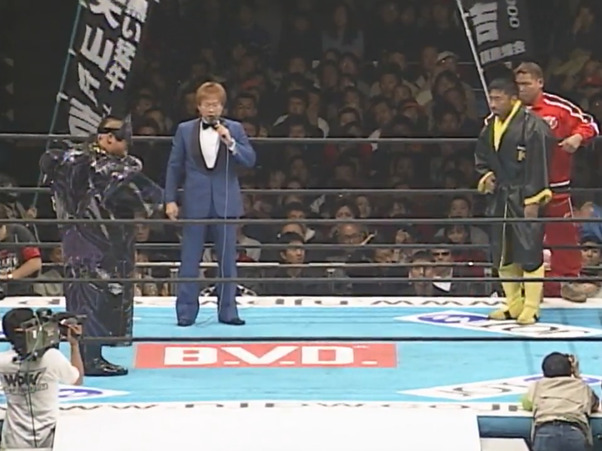 It’s 2001 and a lot has happened in the last twelve months. Since both promotions came into existence in 1972, New Japan Pro Wrestling’s main competitor had been All Japan Pro Wrestling. NJPW was formed by Antonio Inoki and AJPW by Giant Baba – both were students of Rikidozan. Giant Baba passed in January 1999 leaving the leadership of the promotion to top star Mitsuharu Misawa and the majority ownership to his widow Motoko Baba. Misawa was voted out of the position in May 2000 and broke away to create Pro Wrestling NOAH. In this breaking away, he was joined by the entire native roster, with the exceptions of Masanobu Fuchi and legendary rival Toshiaki Kawada.

Hurt significantly by the departure of most of the roster, AJPW welcomed back Genichiro Tenryu (whom Baba had said would never be welcomed back after he left to form Super World of Sports in 1990). They also changed their talent philosophy. AJPW had previously worked with the NWA during the 70s and 80s, but in the 80s adopted a closed-borders policy and for the most part, didn’t book talent from outside the promotion. The gaijin that they did use were generally long-term commitments.

This all changed in August 2000 when Masa Fuchi (who had been with Baba and AJPW since day one) appeared on a New Japan Pro Wrestling event to ‘break down the walls’ between the two long-time rival promotions. The offer was accepted by Riki Choshu and the two promotions began sharing talent and working together.

Toshiaki Kawada defeated IWGP Heavyweight Champion Kensuke Sasaki in front of a sold-out Tokyo Dome at NJPW in October 2000. This was a non-title match so Kawada didn’t win the belt, but as Sasaki had lost the match – he vacated the title. The 27th champion would be determined in a tournament to be held at Wrestling World 2001.

In the quarter finals that opened the show, Kensuke Sasaki defeated Satoshi Kojima and Hiroyoshi Tenzan defeated Yuji Nagata. Masahiro Chono and Toshiaki Kawada had received byes to the semi-finals. Sasaki defeated Chono; Tenzan and Kawada would face off with the winner meeting Sasaki in the main event of the evening with the title on the line!

After the ring introductions the bell rings and the two are straight into it with a collar-and-elbow. Tenzan has already wrestled once tonight and it’s in his best interest to jump right in and try to get it over and done with. Kawada’s no stranger to pacing and conditioning, frequently going 30+ mins with Mitsuharu Misawa and Kenta Kobashi over the years, but the quicker this ends the more he’s got left in the tank. Tenzan breaks the lock and goes straight to the headbutts. Side headlock and Kawada shoots him off, but gets steamrolled with a shoulder block. Mongolian chops from Tenzan and Kawada fires back with a few of his famous kicks and a scoop slam. Tenzan’s straight back up in his face and the two are trading chops. Tenzan mixes it up with a couple of headbutts and splits himself open. Oh what we’ve learnt about brain injury since then… Knee drop and then a chop to the grounded Kawada.

The Violent Bull continues with headbutts and takes Kawada to corner, switching back to some chops. Sends him into the ropes and drops with a back body drop variation. Tenzan dishing out the offence early on. Mongolian chops! And another headbutt. Tenzan goes to eyes and backs Kawada to the corner. Steps up off the rope to deliver a headbutt from another angle and then bounces off the ropes with a spinning wheel kick. Cover for 1. Takes Kawada down with a scoop slam and ascends the ropes. A diving headbutt misses and just as Kawada is about to start mounting some offence, Tenzan cuts him off with a headbutt to the gut. I guess if you’ve got a head like that you’d want to make the most of it. Tenzan just keeps going with the headbutts. Picks up Kawada and he’s looking to end it early with a TTD (Tenzan Tombstone Driver – not to be confused with the DDT). Tenzan back to the top rope and connects with a diving headbutt. Cover for 2.

Tenzan picks Kawada up and seats him on the top rope. Back body drop off the top! 2 count only. Tenzan very clearly in control here, but Kawada not willing to concede defeat just yet. Tenzan throws him to the corner but Kawada collapses halfway. Tenzan picks up him and puts him there, and hits a few clotheslines. Tenzan setting up for something but Kawada has other ideas. A straight right hand to the jaw of Tenzan and the referee is admonishing him for it. It’s illegal, but effective.

Tenzan to his feet and comes in off the ropes, met with a boot by Kawada that staggers him, and sets him for Dangerous K to deliver another. Kawada with a jumping kick that Tenzan manages to block. Tenzan to the corner and Kawada fires in with a running boot to the face! And a few kicks as he slumps for good measure. Off the rope and another vicious boot to the face of the grounded Tenzan. Picks him up and goes for a dragon sleeper but Tenzan counters with a throw. A few kicks and Tenzan catches one with a dragon screw. Tenzan picks Kawada up and another dragon screw. Kawada’s kicks are dangerous weapons and taking them out of play is smart strategy. Figure four from Tenzan. Kawada makes his way to the ropes. Tenzan takes some convincing to break the hold. But he does and then goes straight back on offence. Another dragon screw attempt but met with an enzuigiri. Doesn’t take him down and Tenzan comes in with a lariat. Scoop slam and it looks like moonsault time. Kawada’s on a different clock though and attacks Tenzan on the way up. Lariat to the back and Backdrop Driver!

Tenzan somehow with a kickout at 2! Kawada picks him up, and the two trade strikes. Mongolian chop, slap, headbutt, jumping enzuigiri and Tenzan is down. Kawada picks him up and hits another jumping kick for good measure. 1. 2. Kickout. Kawada looking to end it with a powerbomb but Tenzan manages to break free. Boot to the face. Kawada goes to the well again. Tenzan is heavy. But he gets it! 1. 2. 3! Kawada to the final in 10 minutes and 45 seconds!

Kawada was unsuccessful in the final which saw Sasaki begin his third title reign. The alliance between the two companies would last until January 2002 and was critical to maintaining All Japan’s existence after the exodus. Following this time Keiji Mutoh would leave New Japan (taking Satoshi Kojima and Kendo Kashin with him). Mutoh had held AJPW’s top prize, the Triple Crown Championship during the alliance and was unhappy with the direction that New Japan had began to take with regards to integrating more mixed martial arts. He spent ten years with AJPW and took the role of company president, as well as the stock in the company that the Baba family had.

And as for Hiroyoshi Tenzan? He would eventually win the title but more notably go on to set the record for most reigns with the IWGP Tag Team titles, both as an individual and as a team alongside Satoshi Kojima as TenKozy. (His other reigns were with Masahiro Chono as Cho-Ten)