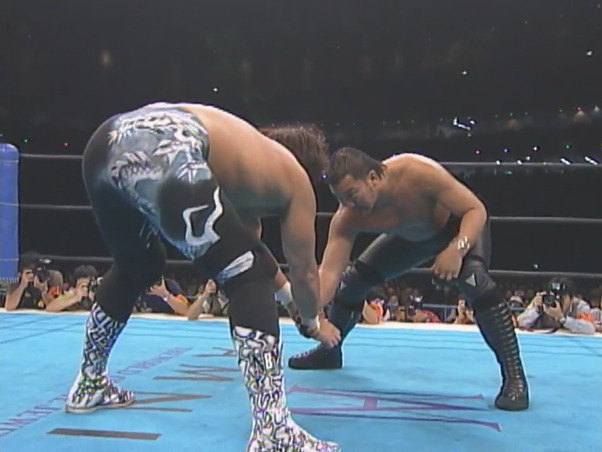 Two years ago in 1998, it was NWO Japan member Keiji Mutoh challenging Kensuke Sasaki for the IWGP Heavyweight title while the group’s leader Masahiro Chono cheered him on from ringside. It’s the start of the new millennium and the two are now facing off against each other. How did it come to this?

Kensuke Sasaki remained champion until April of 1998 when he lost to veteran Tatsumi Fujinami. Fujinami would lose the belt in August 1998 to “Mr. August” (named as such for his success in G1 Climax tournaments) Masahiro Chono. Chono held this title until September where he was forced to vacate it and take a hiatus from NJPW due to a neck injury.

In Chono’s absence Mutoh would lead NWO Japan, and the villainous group was received a little better by the fans under Mutoh. The title would come back to the group two days after Chono vacated it when Scott Norton beat Yuji Nagata for it. Norton would lose the belt to group leader Mutoh at Wrestling World in January 1999. Mutoh held the title through to December 1999 where he lost it to Genichiro Tenryu.

Chono returned to NJPW in February 1999 rather than go back to group he once led, he formed a new group – Team 2000. Chono was unhappy with the babyface position that Mutoh had led NWO Japan to become and recruited defectors Michael Wallstreet and NWO Sting (who later changed his name to Super J, no relation to the Junior Heavyweight tournament). AKIRA would soon follow.

NWO Japan and Team 2000 would battle throughout 1999 and this would come to head here on January 4, 2000. It’s Mutoh vs Chono, a battle of leaders, and the loser’s group is forced to disband!

The introductions are made and Chono’s gone black and adopted the look of a Yakuza boss. A far cry from the green and white tights we saw in 1993. Mutoh’s not too big a departure from the last time we saw him (1998), but unfortunately, he has shaved the beard off.

Two of the three musketeers circle and eye each other off. They’ve got a storied past and neither wants to be the first one to make an error in this high-stake match up. Finally they go to tie up with a collar-and-elbow but Mutoh slips it for a waistlock attempt and Chono catches an arm. Mutoh down with a drop toe hold and floats over looking to grab a hold but Chono’s in the ropes. They know each other well.

They lock knuckles and Chono gets into position to try the arm once again. Mutoh rolls threw, takes the leg and tries to set in with a leglock. Chono steps over, Mutoh tries the first half of Chono’s STF and they separate.

The battle for position continues with Chono working towards a headlock. Mutoh slips it for a waistlock which Chono breaks and goes behind for one of his own. He works Mutoh down with a front facelock. Mutoh stands it up but Chono works it back down. It’s enough to trap Mutoh, but not really do much more, so Chono tries a side headlock. Mutoh breaks it by shooting him off the ropes and gets a shoulder block for his trouble. Headlock takedown on Mutoh and Chono’s back to the arm. Finally gets an arm wringer that he has to really earn and keeps the wristlock applied. The pacing is deliberate here. Chono sends Mutoh to the ropes and Mutoh rolls under the Yakuza kick that’s waiting for him and tries one of his trademark low dropkicks. Chono’s aware of it and narrowly avoids it. A shot to Don Frye at ringside supporting his Team 2000 leader, Chono.

They tie up again and Mutoh looks to take the early control. Chono’s too powerful and Mutoh needs to use his speed to get a throw on Chono. He grabs a side headlock. Chono to a standing position and Mutoh holds the headlock, using it take him down. Chono back to standing, shoots Mutoh off the ropes and goes down with a shoulder block. Snap mare from Mutoh and a flashing elbow. Cover attempt but Chono doesn’t let the shoulders hit the mat. Short arm scissors from Mutoh. Chono breaks free and we see more shots of the group members at ringside. Team 2000’s Frye and AKIRA supporting Chono from the blue corner. NWO Japan’s Hiroyoshi Tenzan and Hiro Saito behind Mutoh in the red corner.

They’re up and Chono hits a toe kick, met by a spinning kick from Mutoh. Mutoh fires in with a punch and then sends Chono to the corner. Chono dodges the handspring back elbow. Chono sends Mutoh in and Samoan drops him on his head. Chono obviously full of concern for Mutoh drops an elbow. Mutoh tries to get back up but Chono lays the boots in. Chono heads the ropes, Mutoh sees an opening and takes him down with a Frankensteiner. Both men down now.

Chono first to his feet and drops Mutoh with a cradle piledriver. Double underhook submission hold applied, but Chono has to work to lock it properly. Mutoh too close to the ropes once he does. Clubbing blow from Chono who then comes off the ropes with a Yakuza kick for 2. Elbow to the top of the head and Mutoh catches the next yakuza. Dragon screw attempt but Chono plants his foot and Mutoh’s in the perfect position to eat a cross armbar!

Chono’s got it on well and this could be the end of NWO Japan. Mutoh eventually gets free, but probably wishes he didn’t after Chono drops him with another piledriver and goes back to the double underhook hold. Mutoh just out of reach of the ropes initially, but slides forward to reach them and break the hold. Both men to adjoining sides of the ring on the apron and Chono flies with a shoulder block, taking them both to the outside. Chono first to his feet and throws Mutoh into the corner post. He’s dragging him over to the commentary position, looking to put him through a table, but Mutoh executes a dragon screw from the table. No furniture was harmed in this manoeuvre.

Referee counting both men out at this point. Mutoh with his low dropkick and it looks like he’s found a target. Chono attempts to get back to the ring and Mutoh takes him down with another dragon screw. The referee’s taken a pause in the count to encourage both men to get back in the ring, Mutoh throws Chono in and then comes off the top with a missile dropkick.

Chono rises back to his feet but Mutoh keeps locked on that target with another low dropkick to the Team 2000 leader. Mutoh takes him to the corner and lifts him up for a Franksteiner! Mutoh’s still trying to get himself together after being on the end of a beating from Chono earlier and doesn’t capitalise with a cover. Chono up, Mutoh low dropkick. Followed up with a dragon screw and a figure four in the middle of the ring! Team 2000 may peril here!

Chono’s only escape is to roll the hold over and reverse the pressure. He attempts it, but is unsuccessful. It gets him closer to the ropes though, which is another way to escape. Mutoh breaks and gets into position, measuring Chono and landing yet another low dropkick to the knee. Rinse, and repeat. The grounded Chono lunges at Mutoh trying to mount something and break this roll, but it doesn’t work and he’s met with another dragon screw. Mutoh goes for a double leg takedown and Chono catches him, rolling it through to the double underhook hold! Tenzan enourages Mutoh from the floor. Don Frye is up on the apron in a similarly pointless position to Chono during Mutoh’s match with Kensuke Sasaki at this same event back in 1998. Chono slumps to the corner. And gets up for another low dropkick. Followed up by another dragon screw. You can’t say this plan isn’t effective. Figure four once again! The bigger Chono uses his size advantage to drag Mutoh to the ropes and break it. Mutoh then comes off the ropes for what looks like yet another low dropkick, but Chono gets a spinning calf kick in to take the NWO Japan leader down.

Both men to feet and Mutoh with a jumping overhead kick you may best recognise as the Pele from AJ Styles. Mutoh with a burst of energy, a backbreaker, a moonsault and a 2 count. Goes for another figure four but Chono tries a small package, doesn’t lock it for a pin but comes through with the double underhook hold. Mutoh finds the ropes rather quickly though. Chono up, off the ropes and caught with a Frankensteiner. Mutoh back to the cross armbar, pretty close to the ropes though and Chono gets there.

Mutoh first to his feet, another backbreaker and up for another moonsault. Chono gets the knees up and then locks in the STF! Mutoh struggles for the ropes. The fate of these two teams hangs in the balance. Chono rolls Mutoh over, puts the legs into an inverted Indian deathlock position and then gets a variation of the STF known as the Deathlock STF on. Mutoh submits! It’s over and so is NWO Japan! Your winner in 25 minutes, the leader of Team 2000 – Masahiro Chono!.

With Chono’s victory, the stable that he founded has been forced to disband. Mutoh would go on to take a break from NJPW to try and recover the knee injury that once forced him to give up the Tag titles. The former members of NWO Japan, now left leaderless by Mutoh’s defeat joined Team 2000 to once again be led by Chono and the group would persist until 2002.