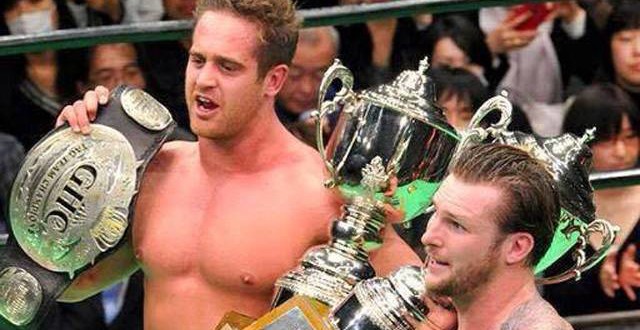 Roadtrip Music: Joker and the Thief by Wolfmother (TMDK)

It’s January 26 which is currently recognised as Australia Day and that brings with it a debate about the appropriateness of recognising a national day on that specific day. A wrestling music post isn’t really the place to have that debate – but you can read about it here.

A music post is the place to post music and due to it currently being Australia Day, I thought I’d do a special Australian edition of the post. So today we’ll be taking a look at Joker and the Thief by Wolfmother, the theme song of TMDK.

Joker and the Thief is the 6th track from Sydney rock group Wolfmother’s self-titled 2005 debut album. The song is Wolfmother’s most successful single and was inspired by AC/DC’s Thunderstruck. This is evident in the opening riffs of both songs.

TMDK or The Mighty Don’t Kneel (alternatively Torture, Murder, Death Kill) were a tag team consisting of Shane Haste and Mikey Nicholls that would later become a bigger faction with Jonah Rock, Slex, Marcius Pitt and Elliot Sexton. The group dominated Australian wrestling throughout the mid 2010s and Haste and Nicholls would go on to find worldwide success. Coming out of Explosive Pro Wrestling in Perth (a pivotal promotion for the growth of wrestling in Australia), Haste and Nicholls began competing in Pro Wrestling Noah in Japan where they would become two time GHC Heavyweight Tag champions. They also competed for Ring of Honor, TNA, Ohio Valley Wrestling and New Japan Pro Wrestling where they became the first Australians to wrestle in the Tokyo Dome in 2015.

In 2016 it was announced that Haste and Nicholls had signed WWE contracts and would begin competing in NXT under the renamed TM-61. Shane Haste became Shane Thorn and Mikey Nicholls became Nick Miller. Nicholls was released in 2018 and returned to EPW in Perth, with a few appearances for New Japan as a part of the Chaos group. Haste was renamed Slapjack and joined the Retribution group before being released in 2021.