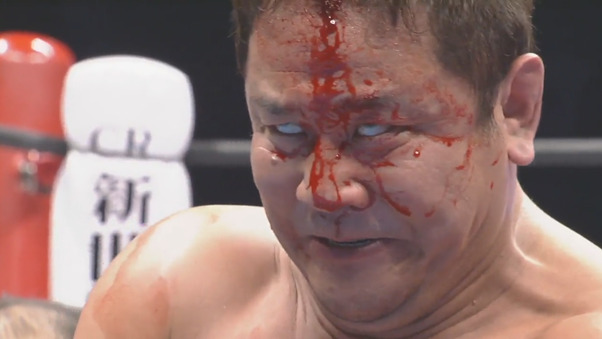 It’s the first appearance of the Wrestle Kingdom name. New Japan celebrate their 35th anniversary by inviting All Japan to compete in a joint celebration (AJPW was founded in the same year) with the intention to recapture the interest that saw big draws when they did this in 2000/2001 and reverse the trend of their numbers dropping. It didn’t really work.

The event was named Wrestle Kingdom to coincide with the release of the Wrestle Kingdom game by – NJPW’s owners at the time – Yuke’s, which featured talent from New Japan, All Japan and Noah. It was built on a modified version of the engine used for WWE Day of Reckoning on the Nintendo Gamecube and plays similar.

The card itself for this event was actually a lot better than some of the previous, featuring interpromotional matches in the undercard (including a meeting between Shinsuke Nakamura and Toshiaki Kawada) and was advertised as having a ‘double main event’ as well as a ‘Super Dream Tag match’ to close the event. The tag match saw a reuniting of musketeers Masahiro Chono and Keiji Mutoh (who left NJPW for AJPW in 2002) to take on the most successful team in NJPW history – TenKozy (Hiroyoshi Tenzan and Satoshi Kojima – who left along with Mutoh). This match was also used to pay tribute to third musketeer Shinya Hashimoto who passed away in July 2005.

Minoru Suzuki graduated from the NJPW Dojo in 1988 and after a very short stint in New Japan he followed his mentor Yoshiaki Fujiwara to the Newborn UWF. When this incarnation of UWF ended, Suzuki joined Fujiwara in his newly established Pro Wrestling Fujiwara Gumi group. This didn’t last long either as Suzuki and Masakatsu Funaki left to create the mixed martial arts promotion – Pancrase. Suzuki had a fantastic record during this period utilising his world class freestyle and catch wrestling skills which have been praised by big names in the sport such as Josh Barnett, Bas Rutten and Ken Shamrock.

Suzuki’s last Pancrase fight at this time was in November 2002 when he embarrassed Jushin Thunder Liger (who was subbing for an injured Kensuke Sasaki) leaving him with a record of 29-19. (He’d have another fight in 2013 which he won, taking him to 30-19). After leaving Pancrase, Suzuki returned to professional wrestling as a freelancer winning tag titles in New Japan (alongside Yoshihiro Takayama) and NOAH (alongside Naomichi Marafuji). In March 2006 he joined All Japan and six months later was the Triple Crown champion.

Since we last checked in with Yuji Nagata after his loss to GHC Heavyweight champion Jun Akiyama back in 2002 he defeated Tadao Yasuda to capture the IWGP Heavyweight title, a reign that lasted from April 2002 until May 2003 and set the record for most successful defences at ten, before he came up against Yoshihiro Takayama. At the 2004 Wrestling World event he defeated Kensuke Sasaki in a match that left the ring looking like a crime scene (all that blood in the pictures from Nakamura/Takayama). In December 2005 Nagata tried to bring the IWGP Third Belt back from Brock Lesnar who had left NJPW with it but was unsuccessful.

Can Nagata find championship success once again? Or will Minoru Suzuki continue his?

Minoru Suzuki hands over the three belts that make up the Triple Crown (it’s now represented by one belt that looks very nice, but it’s not quite the same). Both men are introduced and speaking of introductions, this is the first appearance in this journey of on-screen name graphics. 2007 – the future is now! Your referee for this bout, AJPW’s Kyohei Wada.

Suzuki’s bouncing and raring to go, Nagata is poised and focused. Wada rings the bell and both men rush in. Nagata leads with a kick and Suzuki goes straight to the forearms. Both men exchange and we’ve started hot here. Nagata goes for a kick which is unwise against the Pancrase veteran who catches it and dumps him. Seated is not where you want to be when Suzuki approaches. Nagata backs up to the corner and Suzuki attacks with knees. Sends him corner-to-corner and Suzuki teases a splash before stopping and slapping the challenger. Blatant disrespect and the look Nagata gives is one of contemplation about how he’s going to handle this. Returning fire with a slap seems to be a good way. And he follows it up with a nice respectful spit. Suzuki’s mad, but Nagata’s ready and the two lock up to strike. Nagata takes the advantage and Suzuki is out to the apron where Nagata starts throwing.

Once Nagata starts listening to Wada re: not doing that anymore, Suzuki grabs an armbar over the ropes and both men end up outside. Wada gets caught up in the fun and knocked off his feet as the two battle for control at ringside. The back of Nagata’s head hitting the ringpost means Suzuki wins that battle. Suzuki who’s not exactly known for his upstanding sportsmanship grabs a chair and closes in on Nagata. He hits him with it as he leans against the post. Suzuki back in the ring for a rest and Wada follows him. Nagata is still a while away as he’s being tended to on the floor. And he’s got a bit of claret happening.

Minoru Suzuki poses for the crowd while his opponent struggles on the outside. He’s obviously enjoying the change back to pro wrestling after spending so long with MMA. Wada finally decides a count might be in order and that’s what triggers Nagata to get up. He gets as far as the apron before Suzuki boots him off and sends him flying down to the guard rail. Suzuki follows and sinks the boots in. The chair obviously proving to have been a sound strategic decision here. So sound that Suzuki decides to grab another one. Wada does something about it this time, trying to wrest it from the champion’s grasp. It doesn’t work, but at least he tried. Luckily Nagata has a better result with the big boot he sends Suzuki’s way.

Nagata in a position to attack, throws his all into a kick and then collapses. Both men down. All three if you count Wada. They all rise, Wada heads for the safety of the squared circle as Nagata and Suzuki decide to stay outside. Nagata on top and it looks like Suzuki’s been busted open from Nagata’s boot to the chair. A brainbuster on the floor seems like a reasonable thing to do here and Suzuki being inverted and having the blood rushing to his head has made it come out of his head a bit more. Both men spilling a bit of red now.

Nagata throws the champ in and dares him to rise. He tries but is met with a kick. Wada starts counting Suzuki out. He starts to rise and Nagata starts to kick. From Nagata’s perspective this is looking great. Sends him corner-to-corner and continues the assault. Tries sending him again, but Suzuki counters it and ends up grabbing a sleeper hold. Can’t quite lock the arms and Nagata grabs one and drops it over his shoulder. Nagata keeps kicking, but Suzuki keeps coming!

Suzuki briefly looks to be revelling in this until he gets caught with another kick. Nagata grabs the arm and with it, an armbar. He’s got it tight and the eyes roll back!

The world class grappler is caught here and has to either get out or tap out very soon. Nagata’s eyes can only go so far back in his head! Suzuki finds the ropes. Nagata breaks and goes back to the kicks that have served him so well in this match. Backdrop hold attempt but Suzuki lands favourably and then fires back with a knee to take the challenger down. Both men down, they crawl to each other and it’s time to exchange some headbutts. Headbutts are dangerous so the switch to plain old humiliation with the slaps.

Suzuki gets a long run of unanswered blows and then uses the window it creates for a Gotch-style piledriver. He’s taken too much of a beating to capitalise right away and Nagata has recovered enough to kick out at 2 by then time a cover is made. Nagata rushes in with a kick but Suzuki finally has him scouted as he blocks and then knees him in the gut. Octopus stretch applied by Suzuki!

Nagata works to free his head from the leg and then throws the champ over. As both men recover we are treated to a beautiful shot at what’s at stake here.

Both men fighting to get up and Nagata is first. Slap exchanges! These are getting harder. They switch to the legs as Nagata lands a kick and the catches Suzuki’s, driving him into the corner and then following him in with a step-up knee. The champ flops to the mat. Nagata scrapes him off it and then delivers a spinning brainbuster. One would think it’s time for a cover but Nagata opts for a backdrop instead. That could be it. 1, 2, what?! Nagata pulls the champ up. At this point he’s not here to win titles, but to hurt the man. He lines up for another kick and decides to cover after that one. Kickout at 1 by Suzuki! He’s found his fighting spirit and goes straight after Nagata like a rabid, slap-happy dog. The moment is fleeting however as Nagata regains control and drills him with another kick. Another backdrop attempt but Suzuki manages to knee his way out of it. Nagata comes in with a slap which Suzuki ducks and grabs a sleeper. Saka Otoshi takedown from it and Nagata’s got that hold in tight. Nagata grabs an arm and tries to fight his way out, but unfortunately for him, Suzuki still has the other one around his neck. Nagata fading. Faded. Gone. Minoru Suzuki retains the title in 17:22!